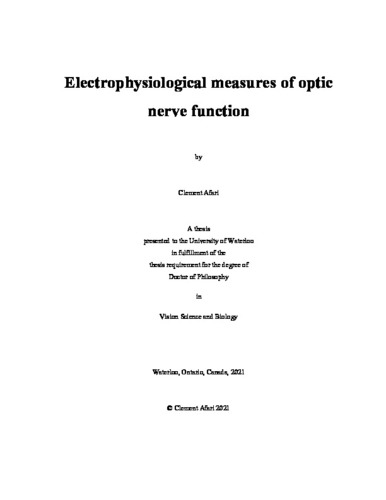 The contribution of retinal ganglion cells (RGCs) to human electroretinograms (ERGs) is known, but that of chicken (Gallus gallus domesticus) is not clear. This project seeks to determine the effect of RGC dysfunction on full-field flash ERGs in chickens using established protocols known to test RGC function in humans and other mammals. Chicks were treated to produce unilateral retinal dysfunction by surgical optic nerve section (ONS group) or by intravitreal injection of tetrodotoxin (TTX group) to block ganglion cell function. Contralateral eyes received sham treatments, consisting of sham surgery or injections of vehicle, phosphate buffered saline (PBS), respectively. For both groups, bilateral, full-field ERGs were recorded in dark-adapted (DA) birds (ONS: n=6; TTX: n=5) or in light-adapted (LA) birds (ONS: n=10; TTX: n=5) prior to the imposed treatment (at one-day post-hatch) and on days 3-, 5-, 7-, 14-, and 21- post-treatment on the same birds. In addition, bilateral, full-field, long-flash (150 ms) ERGs were recorded from light-adapted birds (ONS: n=8; TTX: n=5) prior to treatment (at one day post-hatch) and again at 3-, 14- and 21-days post-treatment. Interpolation and curve fitting, including Naka Rushton fitting, were used to report parameters of the ERG stimulus-response series such as maximum amplitudes (Vmax) and sensitivity (k, stimulus producing half Vmax). Cell counts (retinal histology) were conducted of the RGC and inner nuclear layers from histological sections of a separate group of 6 birds sacrificed at 21 days post-ONS. For both groups, the measures of the DA ERG stimulus-response series (dark-adapted Vmax and k, the oscillatory potential amplitudes, and the interpolated a-wave parameters) did not differ between the treated and sham-treated eyes in either treatment group. In addition, for both treatment groups, the negative waveform of the scotopic threshold response (STR), which reflects RGC function in most mammals, was not apparent in the chick ERGs to dim flashes. No differences between the eyes were v detected for the positive STR/DA b-wave to 0.01 cd.s/m2 flashes (ONS: p=0.59; TTX: p=0.21). Similarly, the photopic negative response (PhNR) following the light-adapted b-wave was small and showed no effect of either treatment (ONS: p=0.92; TTX: p=0.11). However, the offset positivity, the d-wave amplitude, was smaller in the treated eyes in both the ONS and TTX groups (ONS: p=0.008; TTX: p=0.03), but d-wave implicit times did not differ. Cell counts confirmed that RGCs were selectively lost following ONS (p<0.0001). This study suggests that the STR and PhNR do not reflect RGC functions in chickens, as they do in most mammals. Anatomical differences between the chicken and human retinae might underlie differences in the generation of ERG waveforms associated with ganglion cells. In particular, chicken eyes, and avian eyes in general, lack an inner retinal blood supply and associated intra-retinal astroglia which may be necessary for the generation of STR and PhNR waveforms. Finally, this thesis showed that, unlike in humans, the chicken d-wave may reflect the function of cells in the optic nerve including RGCs and cells of the centrifugal vision system in the chicken.