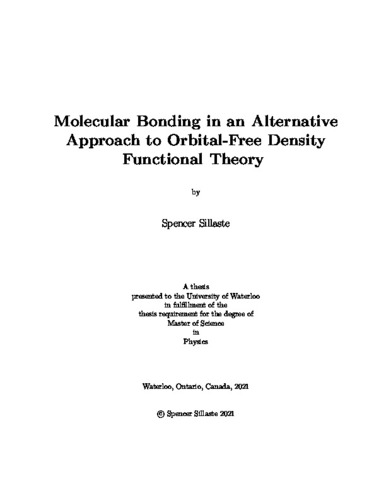 An alternative approach to orbital-free density functional theory based on polymer self-consistent field theory for modelling diatomic molecules is proposed. The ability of the theory to accurately model the bonding characteristics of diatomic molecules will elevate the theory beyond simple atomic system calculations. Homonuclear diatomic molecules H₂, N₂, O₂ and F₂ modelled using this theory exhibit molecular bonding in agreement with known results. Heteronuclear diatomic molecules CO and HF also exhibit molecular bonding. The calculated electron density contours are found to be in agreement with known density functional theory results. Bond lengths for the majority of diatomic molecules studied are found to deviate less than 8% when compared to accepted experimental results and less than 9% when compared to Kohn-Sham density functional theory results, with the exception of O₂ and F₂, which deviated significantly from both results. The bond dissociation energy for H₂ is found to be within 16% of the accepted experimental value, but the fundamental vibrational frequency does not agree well with experimental results. The main approximations in the theory are a Fermi-Amaldi factor in the electron-electron interaction that corrects for electron self-interactions and Pauli potential based on excluded volume arguments to account for the Pauli exclusion principle. The governing modified diffusion equation is solved in terms of a basis set that encodes the cylindrical symmetry of diatomic molecules.