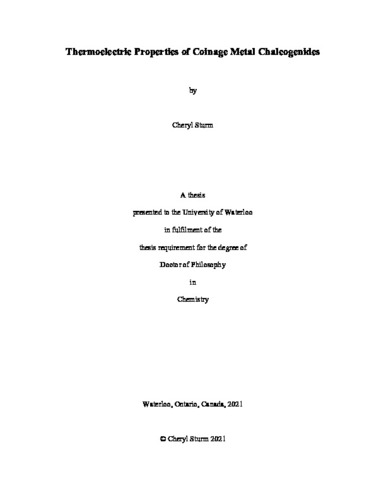 Research into the development of high performance thermoelectric materials has been gaining interest because of the potential for various applications. In the public eye, thermoelectric devices are readily recognized, such as the radioisotope thermoelectric generators utilized by space agencies to power exploratory rovers on Mars and deep space satellites. Thermoelectric materials are also investigated for their ‘green applications’, such as waste heat recovery in automobiles and industrial processes. The purpose of this thesis is to optimize and study the thermoelectric properties, and determine the viability as potential candidates for thermoelectric devices of three different coinage metal chalcogenides: Cu5Sn2Se7 and Cu5Sn2Te7, Ba3Cu14-δTe12, and Ag8SnS6. The first compounds discussed (Chapter 3) are Cu5Sn2Se7 and Cu5Sn2Te7, which were previously reported to have metal-like properties, which are not desirable characteristics for thermoelectric materials. The aim of this study was to reduce the carrier concentration of these materials by Zn-doping to enhance the thermopower, and then investigate the thermoelectric properties of the doped materials in comparison to the undoped ones. The compounds were synthesized using both the traditional solid-state tube method and ball-milling. The crystal structures were characterized using powder X-ray diffraction, which confirmed that all materials crystallize in the monoclinic system with the space group C2. With the partial substitution of zinc for copper atoms, the compounds exhibited an overall improvement in their thermoelectric properties. Figure of merit values were determined to be 0.20 for Cu4ZnSn2Se7 at 615 K and 0.05 for Cu4ZnSn2Te7 at 575 K. The fourth chapter aims to investigate the thermoelectric properties of hot-pressed Ba3Cu14-δTe12, with a focus on stability concerns due to potential Cu ion movement. Previously published data had suggested that the title compound may be a potential candidate as a mid-temperature range thermoelectric material. All Ba3Cu14-δTe12 materials displayed low thermal conductivity values (<1 W m-1K-1) and desirable electrical conductivities (300 Ω-1cm-1 – 600 Ω-1cm-1). However, the thermopowers presented were low (< +65 V K-1), which produced small zT values, with the highest being achieved zT = 0.12 at 570 K for Ba3Cu13.175Te12. Good reproducibility was ascertained when limiting the property measurements to remain below 600 K. In an attempt to increase the thermopower, and therefore the figure of merit, a brief alloying study with Ag was investigated (Ba3Cu14-δ-xAgxTe12). The addition of Ag, however, did not produce any significant improvements. With the recent studies of Cu+ mobility in other barium copper chalcogenides such as Ba3Cu16-x(S,Te)11, single crystal studies were performed at room temperature to investigate potential changes in the Cu sites after the property measurements. Two single crystals were picked from samples that were tested up to 573 and 673 K; no significant changes in the occupancies in any of the Cu sites were observed. The fifth chapter investigates the stability, and the thermoelectric properties of Ag8SnS6 and Ag8.1SnS6. A bulk sample of Ag8SnS6 was previously reported to exhibit a peak zT of 0.5 at 750 K. It is apparent however, that mixed ion-electron conductors such as Ag8SnS6, due to mobile Ag+, could have stability issues, which were not addressed in previous studies. Indeed, our initial measurements revealed precipitation of Ag and Ag2S wires, depending on the measurement conditions. By limiting the highest operating temperature and the amount of current placed through the sample, stability was achieved. Competitive thermopower values were obtained (S: -500 μV K-1 to -375 μV K-1 between 423 K and 723 K), as well as ultra-low thermal conductivity values (κ: 0.39 W m-1K-1 to 0.29 W m-1K-1 between 423 K and 723 K). However, very low electrical conductivity values (< 0.020 Ω-1cm-1) caused dismal figure of merit values. Additional silver atoms were introduced (nominal composition Ag8.1SnS6) in an effort to increase the amount of charge carriers and thus the electrical conductivity. The electrical conductivity overall increased significantly (σ: 6.9 Ω-1cm-1 at 770 K), but not sufficiently to produce a competitive figure of merit.