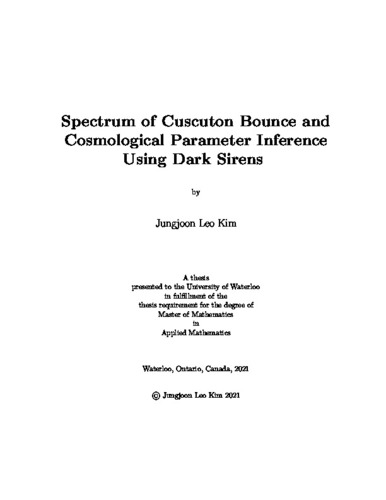 Over the last couple of decades, cosmology has become an exciting area to study. Technological developments in both the computational and observational fronts have propelled cosmology into the limelight of modern physics. Since cosmology is the study of the Universe, many areas of physics — such as astronomy, astrophysics, gravitation, fundamental physics, statistical mechanics, and quantum theory — all couple together and present some of the most fascinating puzzles in modern physics in a natural meeting place. In this thesis I will present my research in two very different epochs of our cosmological history. In order to describe my research, I will first provide a brief introduction to cosmology and Einstein's field equations in a cosmological background. I will then review some of the developments in understanding the very early Universe — a cosmological epoch that corresponds to the very first moments of what we believe to be our cosmological history. I will outline the successes and criticisms of the current paradigm, and discuss the status of alternative proposals that could address some of these criticisms. In particular, bouncing cosmologies are an interesting alternative to inflation since they naturally resolve the singularity problem. I will then present my own work on a bouncing cosmology driven by a modification to general relativity called Cuscuton gravity. In particular, I show the prospects of this model for producing initial conditions for the ripples of spacetime at early times are consistent with observational constraints. In the second half of my thesis, I will drastically shift in time to the ``present day'' Universe, only up to about 2 billion years ago, where I will discuss the prospects of using gravitational waves to extract significant information about the previously hidden sectors of the Universe. To be specific, since the gravitational waves emitted when a compact binary system merges provide an opportunity to measure cosmological distances, this information can then be used alongside previous electromagnetic signals to shed new light on cosmological mysteries. In particular, by assuming that the binary mergers and galaxies both come from the same underlying distribution of matter in our Universe, I show that one can use Bayesian inference methods to infer cosmological parameters without making an excessive amount of assumptions.