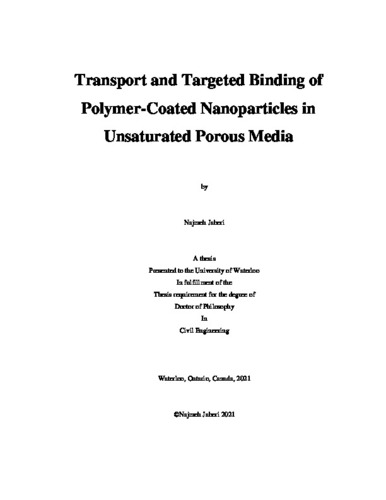 The effectiveness of most in situ remedial technologies lies on successful delivery of reagents to a target treatment zone. Advances in nanoparticle (NP) materials has led to the targeted delivery concept in which the NP coating is engineered so that the NPs are able to transport in a porous medium but bind to specific target contaminants. By taking advantage of this capability, the accumulation of NPs within a target treatment zone increases with a concomitant decrease in the mass of NPs required to achieve treatment goals. In addition to delivery parameters, the transport and binding behaviour of NPs depends on the properties of the NPs and the porous media. NPs coated with an amphiphilic co-polymer (Pluronic) can be tuned so that they have stability in an aqueous suspension as well as preferential binding to oil-water interfaces. The Pluronic coating is comprised of a middle hydrophobic segment which provides sufficient affinity to an oil phase through hydrophobic interactions and two outer, hydrophilic segments that extend into the aqueous phase surrounding the nanoparticle and prevent nanoparticle aggregation. While extensive investigations on this type of engineered NP coating in saturated conditions have been completed, the transport and targeted binding behaviour of these coated NPs in unsaturated conditions has not been studied. Thus, the focus of this research effort was to comprehensively examine the ability of amphiphilic co-polymer coated NPs to transport and bind to a target contaminant in unsaturated porous media. Initially, the effect of porous medium texture, initial water saturation, input dosage, and flowrate on NP transport behaviour was evaluated and then targeted NP binding to a representative non-aqueous phase liquid (i.e., crude oil) zone was examined using a series of short column experiments. To isolate the effects of controlling parameters, NPs (iron oxide (Fe3O4) core material) coated with a high polymer concentration which enhances transport and stability were used except for the targeted NP binding systems where NPs (cobalt ferrite (CoFe2O4)) with lower polymer concentration which promotes binding to an oil phase was used. Building on the findings from the short-column experiments, the transport and binding ability of these NPs at a spatial scale representative of the unsaturated zone above a shallow aquifer system was evaluated using a 1.4-m long column. Finally, to evaluate the capability of the NPs to bind to a heterogeneous crude oil-impacted zone in a less constrained unsaturated system, a two-dimensional physical model experiment was performed. Reactive transport models were used in all investigative phases to support experimental observations and characterize the transport and binding of these NPs. Results from the short column experiments demonstrated that NP retention was influenced by the initial water content, injection flowrate, and clay and silt content. Both initial water content and injection flowrate affect air saturation and hence the abundance of air/water interfaces where NPs are retained. Increased retention of the NPs was observed in sediments with a higher clay and silt content as a result of the larger surface area. NP retention was insensitive over the range of injection doses examined. The transport model that represented the observed NP breakthrough data included mobile and immobile porosity regions, and a simple attachment/detachment reaction with nonlinear Langmuirian blocking for NP retention. The NP binding data demonstrated preferential attachment to the crude oil-impacted sediment under unsaturated conditions. As a result of the lower polymer concentration used in the binding experiments, depth-dependent straining was required to simulate the observed NP retention profile. Observations from the 1.4-m long column experiments also demonstrated preferential NP attachment to the crude oil-impacted sediment consistent with the short-column experiments. Again, depth-dependent straining was required in the transport model to reproduce the observed NP retention near the top of the column. However, as a result of the longer distance that the NP solution travelled, compared to the short-column experiments, a first-order mass loss term was used in the transport model to represent suspected NP aggregation and trapping deeper in the column system. Results from the two-dimensional physical model experiment showed that NP transport and targeted binding were significantly influenced by physical heterogeneities present in the system. Preferential attachment of NPs to the crude oil zone was confirmed; however, substantial retention of NPs was also observed between the infiltration gallery and the top of the crude oil zone as a result straining consistent with the column experiments. Despite the demonstrated targeted binding of the NPs to the crude oil zone, the presence of preferential flow paths reduced NP delivery efficiency to portions of the crude oil zone. An acceptable description of the observed NP retention behaviour in this two-dimensional system was obtained using a single porosity transport model with depth-dependent straining and kinetic attachment/detachment reactions. This thesis provides critical information on the transport of Pluronic-coated NPs in unsaturated porous media and targeted binding to crude oil. The important role of initial water content, flow rate and porous medium texture on NP transport and retention behaviour was established. In addition, the effect of travel distance and heterogeneity on NP targeted binding capability was revealed. The supporting modelling efforts showed that physical and chemical nonequilibrium considerations were required to better represent the observed NP transport and binding behaviour in unsaturated experimental systems investigated. Multiple lines of evidence demonstrated targeted binding of the Pluronic-coated NPs to a crude oil zone in unsaturated porous media which will ultimately improve the treatment efficiency of these systems. The delivery of these NPs to a target NAPL zone distal from the injection location may be a challenge due to the possible aggregation observed at increased travel distances. Furthermore, like other flushing-based technologies, physical heterogeneities may restrict access of the NP solution throughout the NAPL zone. For efficient targeting, these factors should be considered during the design of a NP delivery system to treat a NAPL source in the unsaturated zone.