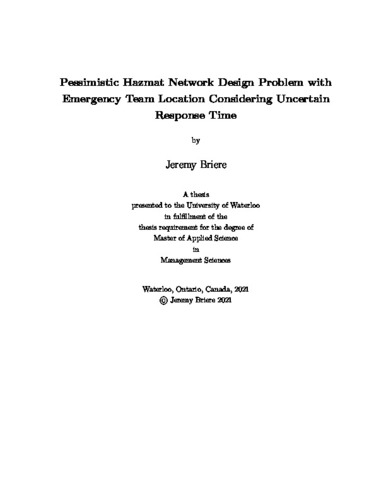 Focusing on a road network where hazmat shipments need to be transported from the origins to destinations, this thesis proposes a pessimistic approach to mitigate the risk associated with the transportation of hazardous materials (hazmat). More specifically, two stakeholders are involved in the process, the government entity implementing risk mitigation mechanisms to minimize the maximum network risk, and the hazmat carriers fulfilling hazmat demand to minimize their total travel distance. Due to the conflicting interests and decision process of the two parties, a bilevel model structure is used, and the pessimistic perspective is assumed to ensure that the carriers' worst behavior can be avoided. The risk mitigation mechanisms implemented in this work include 1) network design, where certain road segments (i.e., links/arcs) are made unavailable to hazmat shipments, and 2) locating emergency response teams to attend to possible incidents in a timely manner. The uncertain nature of the response time is incorporated through the chance constraints for both the most and least desired response times, reflecting the satisfaction levels of emergency services. Because of the complexity of the bilevel model, we investigate two solution methods. The first one is to reformulate the problem into a single level model that is linearized later. The second one is a heuristic algorithm that breaks the problem into two stages that can be solved sequentially. We then present experimental results based on a transportation network in China, showing the efficacy of the model in a real-life scenario and providing insights regarding the nature of the solutions.