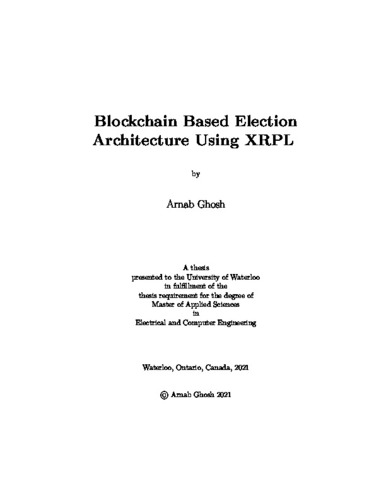 The advent of blockchain technology in 2008 has inspired researchers to explore its applications in various fields including health, inventory management and voting. Governments around the world have been looking for secure and trustworthy alternatives to legacy paper based systems, including online voting schemes which are easily accessible and encourage greater voter participation in elections. Over the last decade, researchers have proposed several blockchain based election systems which utilize the immutability, transparency and distributed consensus properties of blockchain. However, many of these systems lack certain properties such as coercion resistance and fairness, which are essential for successful conduct of elections. Apart from this, scalability of blockchain networks is an important consideration in determining the feasibility of use in a large scale election process. In this thesis, we propose a new blockchain based election architecture based on XRPL blockchain which meets most requirements of a fair and trustworthy election process under certain assumptions. We also implement a small test system as a proof of concept to analyze the feasibility of implementing this architecture.