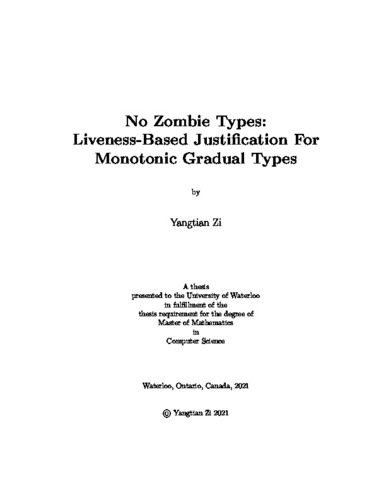 Gradual type systems with the monotonic dynamic semantics, such as HiggsCheck implementing SafeTypeScript, are able to achieve decent performance, making them a viable option for JavaScript programmers seeking run-time-checkable type annotations. However, the type restrictions for objects in the monotonic dynamic semantics are, as the name suggests, monotonic. Once a typed reference is defined or assigned to refer to an object, the contract carrying the type obligation of the reference is part of the object for the remainder of execution. In some cases, such contracts become "zombies": the reference that justifies a contract is out of scope, yet the object still retains the type obligation. In this thesis, we propose a novel idea of contract liveness and its implementation. Briefly speaking, contracts must be justified by live stack references defined with associated type obligations. Our implementation, taking inspiration from how garbage collectors approximate object liveness by reachability of objects, approximates contract liveness by reachability of contracts. Then, to achieve a much closer approximation to contract liveness, we introduce a poisoning process: we nullify the stack references justifying the violated contract, and associate the location that triggered the contract violation with a poisoned reference for blame. The implementation is compared with the original implementation of HiggsCheck. The comparison shows our system is fully compatible with code that raised no errors, with a small performance penalty of 8.14% average slowdown. We also discuss the performance of the contract removal process, and possible worst cases for the liveness-based system. Also, the semantics of HiggsCheck SafeTypeScript is modified to formalize the liveness-based type system. Our work proves that relaxations of contractual obligations in a gradually typed system with the monotonic semantics are viable and realistic.