Under-Ice Fluid Dynamics in Freshwater Lakes: Implications for Ecology in a Changing Climate 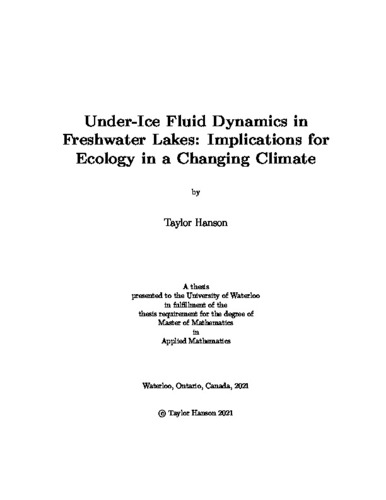 An abundance of evidence exists to support the notion of annual winter blooms of phytoplankton, particularly diatoms, persistent in the surface waters of freshwater lakes located in temperate and boreal climatic zones. Non-motile diatoms are at the mercy of movements within the water column. Under ice cover, the distribution of solar radiation across the lake surface drives convective motions that work to push phytoplankton out of the photic zone; this is the region of the water column that harbors sufficient light conditions for photosynthesis and growth. Winter conditions determine proceeding phytoplankton populations and as such, changes to the mixing and circulation regimes under ice cover may alter blooms in the subsequent open water seasons. Physical fluid processes in winter are controlled by climatic forcing. Thus, it is anticipated that with climate change, freshwater ecosystem compositions will be influenced. In this thesis, we use a non-hydrostatic, pseudospectral model, coined SPINS, to resolve under-ice fluid dynamics driven by incoming solar radiation. More specifically, we employ a three band radiation model to determine how variations in the absorption of incoming solar radiation affect the distribution of phytoplankton beneath the ice surface in late winter (early spring). We consider four cases to identify how changes to the initial temperature stratification and the under-ice irradiance (light levels) affect coupled bio-physical processes occurring within the water column over different time scales. Two separate sites are considered, Lake Erie and Lake Onego, to quantify the effects of radiatively driven convection in lakes with differing optical environments. This work suggests that small differences in water temperatures and weather conditions can cause significant variations to under-ice fluid processes that impact phytoplankton development. This observed sensitivity of hydrodynamics implies that climate change is likely to affect winter mixing regimes.