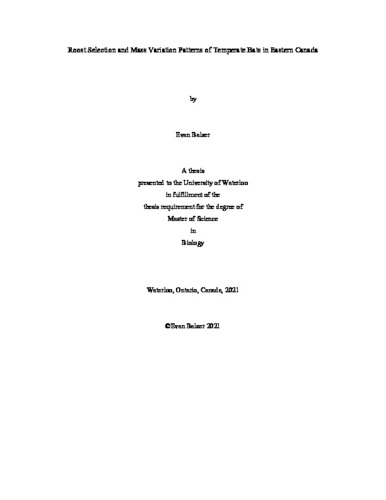 Animals are expected to adjust their resource selection and behavioural patterns to improve fitness outcomes, such as fecundity or offspring survival. For long-lived hibernators, decisions made in each annual cycle may reflect considerations both for concurrent survival and reproduction, but also the pressure to maximize overwinter survival and future reproductive success. I examined how these elements manifest themselves in the roost selection and body mass variation patterns of temperate bats. First, I tested whether roost selection by little brown bats (Myotis lucifugus) on Prince Edward Island could be explained by landscape characteristics. Given a sample of roosts identified through radio telemetry and community reports and a randomly selected sample of comparison structures, I determined that a combination of proximity to forest and open wetland best explained roost selection. Second, I characterized the summer and fall mass variation patterns of both little brown myotis and northern myotis (M. septentrionalis) from a historic dataset. In summer, the estimated date of parturition was strongly associated with spring foraging conditions (low wind, low precipitation, warm temperatures), and mass gain associated with female reproduction conferred considerable differentiation between the mass variation patterns of females and males. In fall, differences were most apparent among species, although adults exhibited a greater capacity for rapid mass gain than juveniles. These results demonstrate how reproductive constraints and interannual survival have important influences on the behaviour of temperate bats. Roost selection appears to reflect the optimization of time and energy budgets, and the proportion of maternity roosts within the sample supports the contention that the effect of these constraints on roost selection may be more acute in reproductive females. Similarly, the relationship between foraging conditions and the timing of parturition provides further evidence that females facilitate early parturition through a combination of roost selection and capitalization on favourable foraging conditions. In fall however, the shared requirement of prehibernation mass gain among species, ages, and sexes yielded lower differentiation in mass variation than summer. Collectively, these outcomes provide evidence for the nuanced influence of life history characteristics on temperate bat behaviour. The disparate summer characteristics among sexes identified in my work suggest that management should provide nuanced supports for these endangered species, including the identification and preservation of important anthropogenic maternity roosts. Future work should seek to clarify the role of physical characteristics on roost structure selection and quantify the fitness benefits of patterns identified in this study, such as the rate of prehibernation mass gain.