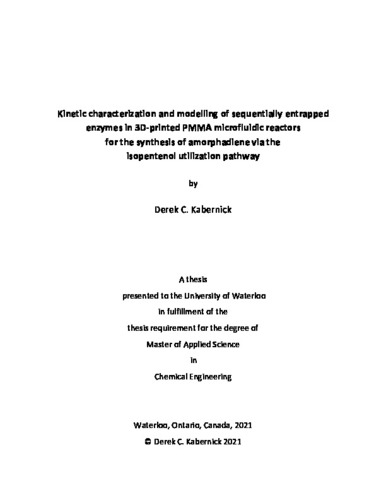 Recent technological developments in the field of additive manufacturing have gained researcher attention as a low cost, high resolution, method for the fabrication of microfluidic reactors. In recent years cascade immobilized enzyme microfluidic reactors have been developed for in vitro synthesis, cofactor regeneration, and product detection due to the benefits of enzyme immobilization such as increased stability, ease of product recovery, and ability for continuous operation. Reviews of the current literature relating to 3D-printed cascade immobilized enzyme microfluidic reactors and isoprenoid synthesis have been performed and analyzed to identify cascade enzyme entrapment and the recently discovered, synthetic, isopentenol utilization pathway as promising topics for investigation. Expanding upon the current fields of cascade immobilized enzyme systems and isoprenoid synthesis, in this study, additive manufacturing was used to entrap enzymes during 3D-printing for the fabrication of sequentially immobilized microfluidic reactors to synthesize amorphadiene, a precursor to the antimalaria drug artemisinin, in vitro via the isopentenol utilization pathway. As an initial proof-of-concept to investigate the feasibility of simultaneously entrapping enzymes in a poly(methyl methacrylate) matrix during stereolithographic 3D-printing, alkaline phosphatase was kinetically characterized for microfluidic reactor modelling in COMSOL Multiphysics and tested experimentally. Kinetic characterization demonstrated no significant shift in the modelled substrate binding affinity between the free and immobilized assays having values of 1.57 ± 0.02 μM and 1.59 ± 0.01 μM, respectively. Due to the internal diffusion limitations of enzyme entrapment, the modelled immobilization efficiencies at a surface area to volume ratio of 2666 m2/m3 were low ranging from 0.028 ± 0.003 to 0.057 ± 0.002. Continuous operation of an immobilized alkaline phosphatase microfluidic reactor demonstrated high stability retaining 85.4-92.3 % and 54.2 % of its initial mean enzymatic activity over 16 days of continuous operation and 84 days of storage, respectively. COMSOL Multiphysics was also an effective modelling tool with only a 3.9 % difference between the observed and modelled outlet product concentrations of 4-nitrophenol. Based on the promising modelling and characterization results for alkaline phosphatase, the isopentenol utilization pathway enzymes were synthesized, purified, and characterized having normalized immobilization efficiencies ranging from 0.0135 ± 0.010 to 0.249 ± 0.026 for a surface to volume ratio of 2666 m2/m3. Amorphadiene was successfully synthesized for the enzymes free in solution and sequentially immobilized along the walls of a microfluidic reactor resulting in an amorphadiene productivity of 0.00115 ± 0.0008 mg/L∙h and 1.81x10-6 ± 0.18±10-6 mg/L∙h β-caryophyllene equivalent, respectively. Monitoring the stability of the downstream enzyme compartments was hindered due to low pyrophosphate detectability, however the stability of the choline kinase and isopentenyl phosphate kinase compartments were relatively high with only a 11.4-16.6 % decrease in the concentration of adenosine diphosphate after 10-13 days of continuous operation and 58.7-60.7 % after 41 days. The relative steady-state error of the COMSOL Multiphysics modelled outlet adenosine diphosphate concentration was only 1.2-4.9 %, however the design of the cascade microfluidic reactor was significantly limited by the requirement for extensive enzyme dilution and future work will depend on further stereolithographic developments resolving this limitation.