Emotion Dynamics Among Pre-Adolescents Getting to Know Each Other: Dyadic Associations with Shyness 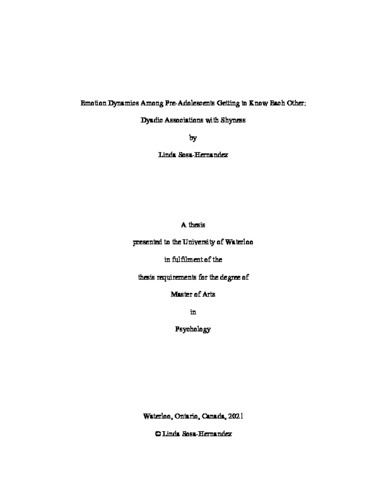 Background. Shy children have difficulty forming new friendships. Central to friendship initiation are emotion exchanges between new social partners. Past research based on trait and global measures of emotion suggest that shyness is associated with higher expressions of negative emotions. Given the dyadic and dynamic nature of emotions that peers express in real-life, it is crucial to uncover how emotions unfold moment-to-moment as children are getting to know each other to support the development of friendships for highly shy children. Objectives. Grid-sequence (Brinberg et al., 2018) and state space grid analyses (Hollenstein et al., 2013) were used to examine how individual differences in shyness and similarity in shyness influence the content (i.e., dyadic emotion patterns) and structure (i.e., emotional variability) of children’s momentary emotion exchanges with a new peer. Specifically, the present study sought to 1) describe intradyad differences in children’s pattern of emotion expressions, 2) examine whether these intradyad differences were associated with shyness, 3) explore the influence of a child’s own and their unfamiliar partner’s shyness on their emotional variability (i.e., the range and shifts in and out of emotion), and 4) investigate the extent to which dyadic similarity in shyness influences emotional variability and dyadic emotion patterns among unfamiliar peers. Method. The positive, negative, and neutral emotions of age-and gender-matched unfamiliar dyads (N=30, Mage = 10.13 years, 75.8% White) were observed during a 5-minute in-lab task, in which dyads were simply instructed to ‘get to know each other’ (Usher et al., 2015). Shyness was assessed using parent and child reports (Capaldi & Rothbarth, 1992; Crozier, 1995). Results. 1) We identified three interdyad patterns of emotion that unfolded moment-to-moment as dyads were getting to know each other: (a) frequent expressions of shared positive affect and dyadic turn taking between neutral and positive affect (n = 18), (b) frequent expressions of shared neutral and dyadic turn taking between neutral and negative affect (n = 11), and (c) frequent expressions of shared negative affect and dyadic turn taking between neutral and negative affect (n = 5). 2) Relative to children in pattern (a) children in pattern (c) were higher in parent and self-reported shyness. 3) Actor-partner Interdependence models showed that higher child (but not parent) reports of shyness were related to lower emotional variability. However, a child’s emotional variability was not related to their partner’s shyness. 4) Children that were more similar in their levels of child-reported shyness displayed less emotional variability, regardless of whether pairings were of two shy versus two non-shy children. Implications. This study capitalized on recent methodological innovations and found that shyness may impair both children’s emotion dynamics the first time they meet, holding critical implications for bolstering friendship formation for both shy and non-shy children.

Linda Sosa Hernandez (2021). Emotion Dynamics Among Pre-Adolescents Getting to Know Each Other: Dyadic Associations with Shyness. UWSpace. http://hdl.handle.net/10012/17212