Enhancing Memory by Enactment: Does Meaning Underlie the Advantage of Producing or Observing an Action? 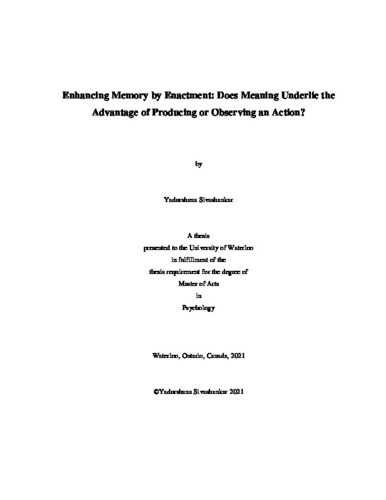 Enactment is an encoding strategy in which performing an action depicting a word (relative to reading) enhances its memorability. Precisely how this motor activity aids recall is unclear. In our Experiments, we investigated whether actions needed to convey meaningful information about the verbal target to confer a memory benefit. In Experiment 1 (Chapter 2), participants were asked to either a) enact, b) perform unrelated motoric gestures, or c) passively read forty-five visually-presented action verbs shown sequentially, and intermixed during encoding, in a within-subjects design. We found that enacted words were recalled significantly better than words read or gestured at encoding. In Experiment 2 (Chapter 2), to control for ambiguity in gesture initiation, participants were specifically instructed to write target words in the air on “unrelated gesture” encoding trials. Results were similar to Experiment 1. In Experiment 3, we aimed to replicate the results of Experiment 2 using an online platform to be able to video record the onset time of actions initiated in response to verbal targets, as a measure of action planning. Chapter 2 experiments showed 1) that meaningful or task-related action produced at encoding is critical to the enactment effect, and that 2) planning of meaningful actions may also contribute to the memory performance. In Experiment 4 (Chapter 3), we asked whether the performed action needed to be semantically relevant, and whether it needed to be performed by the subject (relative to observing the action of an experimenter), to confer a memory benefit. As in our previous experiments, the semantic relevance of actions to items was found to be important for the memory benefit. Importantly, the magnitude of the enactment benefit was greater when participants performed rather than observed the actions of a researcher. Results from Chapter 3 suggest that a social presence may contribute to the magnitude of past reported effects of action observation. Overall, this thesis shows that (1) semantic relevance of actions produced at encoding is critical for the observed memory boost, and (2) planning of task-relevant actions highlights another key component by which enactment benefit memory.

Yadurshana Sivashankar (2021). Enhancing Memory by Enactment: Does Meaning Underlie the Advantage of Producing or Observing an Action?. UWSpace. http://hdl.handle.net/10012/17197