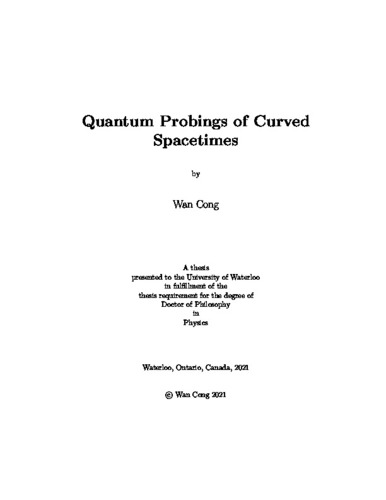 This thesis is divided into two parts. The first part studies the response of Unruh DeWitt detectors in different spacetimes. One of the main goals here is to demonstrate that Unruh DeWitt detectors can detect spacetime features located far from the detectors themselves faster than classical detectors. We do so by placing the detectors in massive shells inside of which the spacetime is flat. We will show that detectors interacting with the quantum vacuum for a finite amount of time will be able to (i) detect the presence of a spherical shell, (ii) differentiate between a static shell and a rotating shell, and (iii) detect conical deficits located outside cylindrical shells. Next, we move on to study how the entanglement harvested between a pair of detectors is affected by the presence of Dirichlet boundaries in 1+1 dimensional Minkowski spacetime. Moving reflecting boundaries lead to particle creation, increasing the noise in the detectors which tends to suppress entanglement. However we find that in general optimal placement of the detectors from the mirror can instead enhance the amount of entanglement harvested as compared to global Minkowski spacetime. Accelerating mirrors which approach the speed of light asymptotically give rise to "information loss" in a toy analogy to the black hole scenario. We show that this leads to a late time linear increase in the entanglement, similar to the behaviour of the regularised entanglement entropy of the field. In the second part of this thesis we will study the possible phase transitions of slowly accelerating Anti-deSitter black holes. We will do so in the extended phase space, identifying the cosmological constant as a thermodynamic pressure. The acceleration adds another work term to the first law, coming from the tension of the cosmic string pulling on the black hole. We find that while charged slowly accelerating black holes display Van der Waal's type phase transitions like their non-accelerating counterparts, this is only true at low string tensions. At higher string tensions, we find reentrant phase transitions and a no black hole region in the phase diagram not seen in the non-accelerating case. We will also consider rotating slowly accelerating black holes. In addition to the reentrant phase transition in the charged case, rotating black holes can further demonstrate zeroth order phase transitions. The P-T phase diagrams also present subtle differences between the two cases.