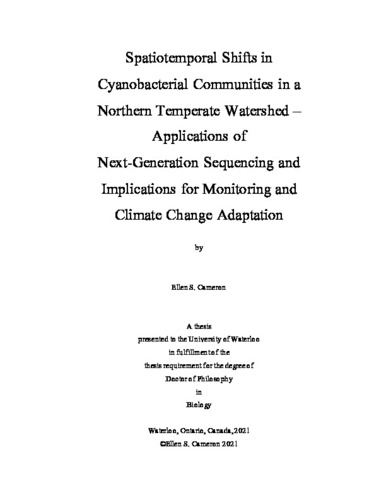 Cyanobacteria, a group of photosynthetic bacteria, threaten water quality and drinking water resources globally through the production of potent toxins and the formation of dense surface blooms. These bloom events are increasing in intensity, frequency, and duration due to warming climates and anthropogenic land use and require monitoring programs for water quality management. However, cyanobacteria vary both spatially and temporally and if sampling efforts do not reflect this variation, potentially toxic organisms may be undetected or underestimated. This thesis explores the spatiotemporal trends of cyanobacterial communities in a series of interconnected, oligotrophic lakes in a northern temperate watershed (Turkey Lakes Watershed; North Part, ON) using next-generation sequencing (NGS). Next-generation sequencing of marker genes allows for rapid characterization of environmental communities and has become increasingly accessible, allowing for interdisciplinary applications. Optimal approaches in data handling and analysis are debated due to key challenges arising due to the data structure. Amplicon sequencing samples will vary in library sizes—the total number of reads—but this variation is not biologically meaningful and library sizes must be normalized to account for these differences. Rarefying, the process of subsampling to a normalized size, is frequently used to account for this variation but has been highly criticized due to the omission of valid data. To address the concerns of data omission, repeated iterations of rarefying were evaluated as a normalization technique in diversity analyses (Chapter 2). Repeatedly rarefying was demonstrated to characterize variation introduced through subsampling for applications in diversity analyses. This technique was implemented in the subsequent analysis of cyanobacterial communities in this thesis. Cyanobacterial communities are dynamic exhibiting heterogeneity in their spatial and temporal distribution in lakes. This spatiotemporal variation is driven by environmental conditions and physical characteristics (e.g., cell size, cell density) of taxa and can subsequently create challenges in monitoring. The spatiotemporal variation of cyanobacterial communities was characterized on both a diurnal scale (Chapter 3) and seasonal scale (Chapter 4) through amplicon sequencing of the V4 region of the 16S rRNA gene. Although the lakes in this study did not have visible bloom biomass, cyanobacterial sequences comprised up to 56% of the bacterial community and were frequently dominated by sequences classified as picocyanobacterial genera, which range from 0.2 – 2.0 µm in diameter. This dominance exemplifies the inability to rely on visual detection as a monitoring technique. In both studies, trends in the spatiotemporal variation varied between the lake sites due to differences in morphometry, thermal stratification and surrounding landscape processes demonstrating the impact of system specific characteristics on cyanobacterial dynamics. In combination with warming climates in temperate zones, cyanobacterial growth habits may change and appear as significant components of the bacterial community as early as May in oligotrophic lakes contrasting the previous perception of peak occurrence in the late summer requiring monitoring protocols to re-evaluate appropriate sampling time frames in temperate systems. The research conducted in this thesis identifies key areas for developing ecologically relevant sampling guidelines for cyanobacterial monitoring in lakes. Monitoring protocols are frequently developed from characteristics of common bloom forming taxa resulting in reliance on visual observation of biomass at the surface of the water and focusing sampling efforts to the summer months when blooms typically occur. This research demonstrated the flaws in these assumptions and provides a discussion on appropriate recommendations. Specifically, cyanobacterial community dynamics were demonstrated to be impacted by system specific characteristics and sampling protocols must be tailored to reflect the (i) physicochemical characteristics of the system, and (ii) ecological community structure. The research presented herein demonstrates the need for re-evaluation of current guidelines due to shifts in cyanobacterial growth habits in response to warming climates, and the reported dominance of picocyanobacteria which may impose toxicity risks despite the absence of visible biomass.