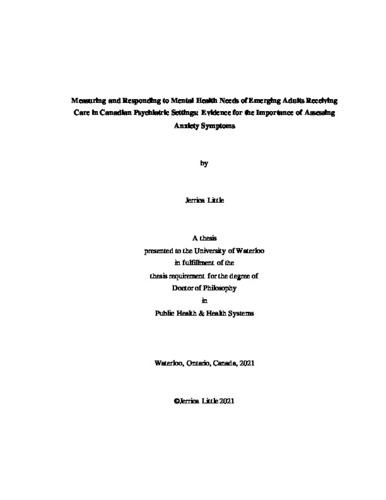 Background: Emerging adulthood (EA) is a developmental period between the ages of 18-29 that is characterized by numerous life transitions, as well as high rates of psychological distress and onset of several psychological disorders. Despite a high need for mental health services, EA are more likely to disengage from psychological treatment than other age groups, prompting a national policy review on mental health care systems and EA. Lack of comprehensive research on mental health needs and service use patterns among EA, as well as gaps in coordinated care across health systems, were two major issues identified in the report. To address these gaps, this thesis focuses on investigating clinical characteristics among EA receiving care in inpatient psychiatry, emergency departments (EDs), and community mental health agencies across Canada, with a particular focus on issues related to anxiety. Study one: While several research studies have explored mental health trends among EA in general and post-secondary settings, relatively little is known about individuals accessing formal mental health services. To determine clinical needs and service use patterns among EA in these settings, interRAI mental health assessment data for 18- to 35-year-olds were obtained from three sources: 1) Resident Assessment Instrument – Mental Health (RAI-MH) data from all inpatient psychiatric hospitals and units across Ontario between 2005-2019 (n=85,762); 2) Community Mental Health (CMH) data from participating agencies across Ontario between 2005-2006 and 2017-2019, as well as Newfoundland between 2012-2014 (n=2,548) and; 3) Emergency Screener for Psychiatry (ESP) data from participating departments across Ontario between 2013-2014 and 2018-2019 (n=1,368). While clinical needs did not vary greatly across age groups within EA, a notable exception was observed for substance use, with more non-primary substance use disorders and recent cannabis use among those aged 18-25. Across care settings, clinical characteristics often reflected aspects of system design, such as greater risk of harm to self and others in inpatient psychiatry and more severe symptoms of depression and social withdrawal in community mental health. Unlike the other two settings, the ED observed a greater proportion of primary to non-primary anxiety disorders, signaling potential gaps in continuity of care for anxiety. The depth of information provided in this study can be used to support research targeted at improving coordination of mental health care for EA across Canada. Study two: To adequately measure anxiety for clinical practice and research, a symptoms scale is needed in addition to diagnosis, but one has not yet been developed for the interRAI assessment instruments. This study fills this gap by creating an initial interRAI anxiety scale using data available through the RAI-MH. Admission and discharge assessments were obtained for adults aged 18+ from 2005-2019, representing all psychiatric inpatient hospitals and units across Ontario (n=237,862). Six items representing psychological symptoms of anxiety were tested, as well as five somatic health items. Factor analysis revealed that a unidimensional factor comprised of only the six psychological indicators was the best fit for the data (CFI=0.94, RMSEA=0.08), and so an additive, continuous scale was created. However, latent class analysis (LCA) and item response theory (IRT) revealed that the compulsive behaviour item did not perform well in the scale, and so an alternative version with five items was created, as well as a class-based structure representing frequency of symptom occurrence. Finally, decision tree algorithms were also developed, incorporating complex interactions between psychological and somatic symptoms. After testing each version through logistic regression analyses with anxiety disorders, the five-item continuous scale was selected as the best candidate (c=0.70). Criterion validity measures of the anxiety scale were explored, as well as responsiveness to treatment, providing support for the creation of an anxiety scale using interRAI items. Although new items may be needed to complete the scale, such as social anxiety and generalized anxiety symptoms, the initial version can be used in research and clinical practice to address issues related to anxiety. Study three: Although anxiety disorders are prominent in the general population and are a major driver of emergency department visits among youth and EA, they have traditionally been rare in psychiatric hospitals. As rates of anxiety increase in health care settings, it is important to understand the current treatment patterns for individuals admitted to hospital with anxiety. Using RAI-MH admission data from 2005-2019 for EA aged 18-30 (n=65,528), as well as short-stay data (n=98,607), several treatment and social resource variables were examined using anxiety disorders and symptoms. Symptoms of anxiety shared a more consistent pattern with symptoms of depression than vice versa, indicating that anxiety is often treated as comorbid to depression in psychiatric hospitals. This is consistent with primary anxiety disorders demonstrating greater odds of short-stay hospitalizations (OR=1.78), with increasing severity of anxious symptoms decreasing the odds (OR=0.77-0.26). Opposite effects of anxiety disorders and symptoms were also observed for social resource variables, such as lower odds of staff reporting frustration when anxiety disorders were present (OR=0.66-0.56), but greater odds as symptoms of anxiety increased (OR=1.23-2.65). The results of this chapter indicate that anxiety is a major concern for EA seeking psychiatric help, and to properly address this need, both diagnoses and symptoms are required to gain a holistic understanding of care patterns and outcomes. Conclusions: Cross-sectoral mental health research that identifies gaps in continuity of care among EA is urgently needed to address high rates of disengagement from treatment in this population. To fulfill this need, this thesis provided information on clinical characteristics and service use of EA accessing inpatient psychiatry, ED, and community mental health settings. To better promote care for EA experiencing anxiety, an initial anxiety scale was created for the interRAI health assessment instruments, containing five psychological indicators of anxiety. The anxiety scale was then used to examine treatment patterns among EA receiving services in psychiatric hospitals and units, revealing that anxiety disorders and anxious symptom severity have opposite effects on care outcomes and social resources. Altogether, identifying the needs and service use patterns of EA is essential for building an evidence-based mental health system that promotes effective and coordinated care.