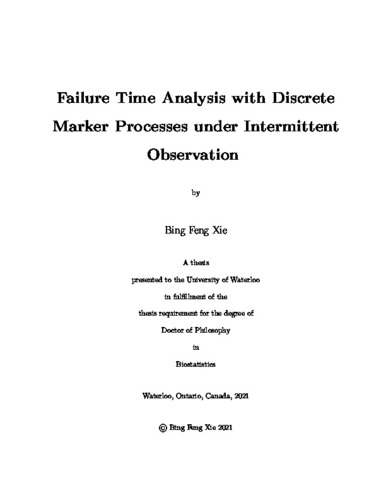 Regression analysis for failure time data is often directed at studying the relationship between a time-dependent biomarker and failure. The Cox regression model and the associated partial likelihood on which inference is based is well-suited for this kind of investigation since the values of time-dependent biomarkers are only required at the observed failure times in the sample. It is common, however, for markers values to be obtained only at periodic clinic visits when biospecimens are acquired for testing. The convention is then to take these values as the working value of the biomarker until the next visit, failure, or censoring. In such settings the assumed biomarker value is typically out-of-date and therefore misrepresents the true value. Joint modeling can be shown to address this misspecification, where the marker process can mitigate the bias from a naive analysis using the last observation carried forward approach. In Chapter 2 of this thesis an expectation-maximization algorithm is developed for fitting a joint (i.e. multistate) model for an intermittently-observed binary time-dependent biomarker and failure time. This is implemented and assessed empirically through simulation studies and applied to a dataset from a cancer clinical trial studying the relation between a biomarker and the occurrence of a composite endpoint defined as the time of a skeletal complication or death. Chapter 3 involves a careful study of the asymptotic bias of regression coefficients from a Cox regression model using the conventional approach of carrying biomarker values forward in time from the time of clinic visits until the next measurement occasion, failure or censoring. Using counting process notation and large sample theory related to misspecified models we gain insights into the determinants of the limiting bias. We consider a true underlying Cox model in which the current marker value and a baseline covariate act multiplicatively on a baseline hazard so the bias in the effect of the biomarker and the baseline covariate can be examined. The determinants of the limiting bias include the proportion of time spent in the two marker states, the relation between the baseline covariates and the intensities governing transitions between the marker states, and the frequency of the measurements. We also define a marker-dependent visit process as one in which the visit intensity depends on the latent marker value. The strength of this association is found to affect the magnitude of the asymptotic bias as well. An expanded joint model is described in Chapter 4 which incorporates the marker process, failure process, visit process and right-censoring process. This general framework accommodates marker-dependent censoring and marker-dependent visit intensities and so is quite general. It offers a basis for joint modeling of all four processes in order to mitigate the biases from either the conventional last observation carried forward approach, or the simpler joint model of Chapter 2. Note that visit and failure times are observed exactly but are subject to right censoring, so the baseline intensities of these events can be well-estimated. The transitions between marker states are unobserved however so these intensities must be modelled parsimoniously. The focus of the investigation is primarily to study the ability to obtain good estimation of the failure process intensity under a marker-dependent visit process and so this is the setting of the simulation studies. We fit the model to data from a study of the relation between an inflammatory blood marker, the erythrocyte sedimation rate, a baseline genetic marker and the time to joint damage involving patients from the University of Toronto Psoriatic Arthritis Clinic. A summary is given in Chapter 5 along with some discussion of topics for future research.