Surface Segregation in Binary Polymer Blends due to Stiffness Disparity 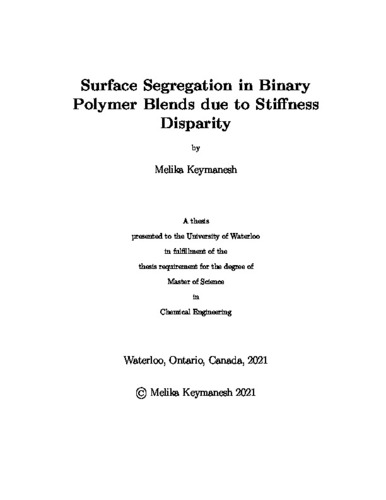 The main objective of this work is to study the surface segregation of a binary polymer blend, where the two components have the same molecular volume but are different in other properties such as end-to-end distance, stiffness, and length. Two models are used to represent the polymer chain, which are known as the Gaussian chain model and the worm-like chain model. Working with the Gaussian chain model, the only parameter is the end-to-end distance and it is shown that the surface is rich in the polymer with a shorter end-to-end distance. Working with the worm-like chain model, we have the ability to change persistence and contour length individually. Hence, we can determine if the polymer has a large end-to-end distance, which of these parameters is responsible for that. This is a better model to predict polymer behavior especially as the polymer gets stiffer. However, it involves more complicated calculations. The results for this model show that if two polymers have the same persistence length, the shorter polymer segregates to the surface. On the other hand, if the two components have the same chain length, the polymer with a shorter persistence length segregates to the surface. The other objective of this work is to compare the two mentioned models. In order to do so, I consider a binary polymer blend, where two components have the same end-to-end distance but their persistence length and contour length are different. According to the Gaussian chain model, there would be no segregation in the polymer blend, but the worm-like chain model showed that the shorter and stiffer component segregates to the surface. This difference between the results shows that the Gaussian chain model has some limitations which are well illustrated in the thesis.