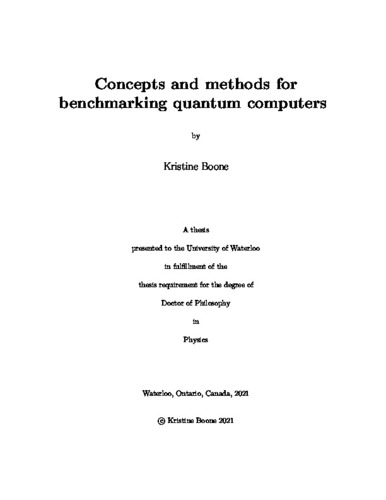 Quantum computers have the potential to bring about a new age of technology, but in order for them to become a reality, the elephant in the room must be addressed, quantum errors. The complexity of quantum errors grows exponentially as the system size is increased; scalable characterization protocols which work under physically realistic noise are therefore needed to assess and optimize control. Randomized Benchmarking (RB) is a family of characterization protocols with the requisite qualities. RB protocols are independent of state preparation and measurement (SPAM) errors, and because they extract partial information about the error profiles in the form of figures of merit, they are scalable in the number of qubits. In this thesis, we study these figures of merit under various error models, gate-sets, and sample distributions, to further our understanding of their physical meaning, and to fine-tune the best practice for diagnosing errors in basic gate-sets. The first study presented in this thesis looks at the physical meaning of the unitarity under physically realistic gate-dependent noise. Numerically, we demonstrate that under these realistic noise models, the unitarity obtained via Extended RB (XRB) overlaps strongly with the average of the unitarity of the errors over the set of individual operations. The second study numerically and analytically proves that the Standard RB (SRB) decay parameter p coincides with the decay parameter of the novel figure of merit gate-set circuit fidelity. We also prove that, in the limit of high-fidelity single-qubit experiments, the disconnect between the average gate fidelity and SRB experimental results is caused by a basis mismatch between the gates and the state-preparation and measurement procedures. In the third part of this thesis, we compare the results of two variations of the SRB protocol, one that samples uniformly (SRB) and one that samples non-uniformly (NIST RB) from the Clifford group. We prove that NIST RB produces an exponential fidelity curve that gives different infidelity results than SRB. The fourth and final study gives a standard for assessing basic gate-sets. Experimental results are given from the assessment run on super-conducting and ion-trap devices. We also experimentally show how the systematic error bounds can be tightened by accounting for the error's degree of coherence, as well as using weaker randomizing sets.