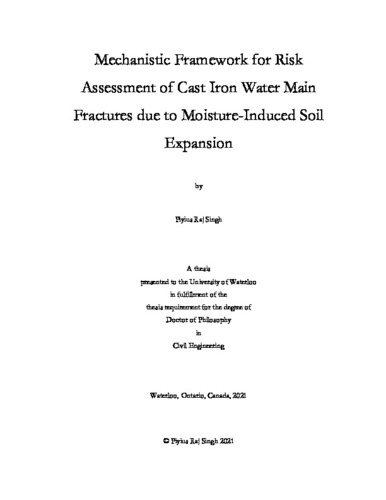 North American water distribution networks are at significant risk of failure due to aging cast iron pipes. For instance, of the 650,000 kilometers of cast-iron pipes in active service in the United States and Canada, more than 80% are beyond their intended service life. These aging and deteriorated pipes are failing at an alarming rate (22 breaks per 100 km per year), resulting in significant disruption to drinking and emergency water supply. The capital investment gap to replace this inventory is too large and will likely take several decades to bridge at the current replacement rate of the order of 0.8% per year. Meanwhile, infrastructure managers rely on managing this gap through simplistic replacement prioritization, e.g., the oldest pipes are the most at risk. Such age-based prioritization schemes disregard multiple risk drivers that contribute to pipe failure. Risk-based decision support frameworks that go beyond simple prioritization schemes by considering multiple risk drivers are necessary to identify and prioritize the most at-risk segments of the network, thereby leading to the better management of the aforementioned gap. Previous studies showed that localized corrosion flaws, also known as pitting corrosion, on the external surface are primarily responsible for damage in pipes, and the strength of these deteriorated pipes to withstand loadings constitutes their stress capacity. On the other hand, the stresses caused by different loads on the pipe comprise stress demand. Field failure data indicate that the plausible failure mechanism is flexure which causes “full-circle breaks.” In the Central and Northern California region, where expansive soils are prevalent, a majority of these beaks (~ 60%) occurred during the months of high rainfall. This suggests that the plausible loading mechanism is moisture-induced differential soil expansion/contraction. Despite that, studies focused on flexural failures driven by differential soil expansion and the overall reliability of pipes situated in environments where potential for moisture-induced differential soil expansion/contraction exists have not been studied well. In this thesis, a probabilistic framework is developed for the assessment of pipe-soil systems vulnerable to fracture caused by a combination of pitting corrosion and moisture-induced soil expansion. The main objectives of this thesis are twofold. First, a physics-based approach is employed to develop an analytical soil-pipe interaction model that can predict full-circle breaks given a range of parameters, such as pipe configuration, soil conditions, and triggering factors (soil expansion). The model is based on classical solutions for beams on elastic foundations that are enriched to reflect material nonlinearities in the soil medium. The model development and comparision are supported by a suite of continuum finite-element simulations that simulate detailed interactions between the pipe and soil. The proposed analytical model demonstrated that it is able to reproduce flexural stresses in a range of pipe configurations with good accuracy and in a fraction of the computational time compared to detailed finite-element models. Next, a risk-based assessment methodology is developed which builds upon this pipe-soil interaction model along with corrosion equations estimating pitting damage in the pipe wall. The sources of uncertainty (uncertainties in various input parameters and the model itself) in all the components are rigorously analyzed and characterized. Subsequently, stochastic simulations employing Monte Carlo procedure is implemented to synthesize various uncertainties into a probabilistic estimate of the failure of a pipe segment, defined by its configurational parameters and age. The prospective use of this is outlined in the context of decision-support frameworks to prioritize replacement. In summary, this thesis presents a physics-based approach to help identify the most at-risk cast iron main pipes given a combination of configurational, locational, and seasonal factors. The outcome of the research is (1) a computationally inexpensive pipe-soil interaction model for pipes experiencing moisture-induced differential soil expansion loading and (2) a vulnerability assessment framework for a pipe segment given its various characteristics and environmental/loading factors. This approach may be conveniently used by utility operators within a decision support framework for asset management and the prioritization of replacement.