'The Objectifying Gaze': The Role of Adaptation in Perceptions of Gender on Television 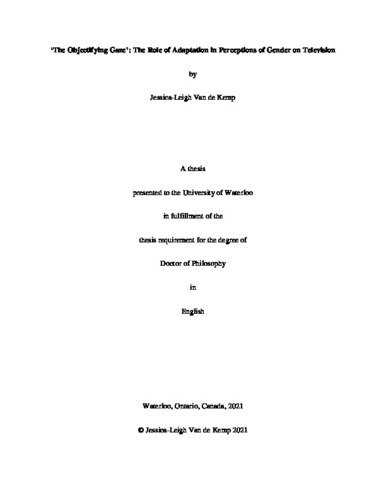 For too long, adaptation studies has been limited to film and focused on adaptation as a product (i.e. the transformation of a novel into a film), but expanding the field to television and emphasizing the process of adaptation (i.e. how texts share meaning) invites critics to contemplate between television and society by considering the concepts of adaptation (e.g. doubling, architextuality, citation, and de(re)composing) that perpetuate stereotypes and myths about women across texts and spaces. My dissertation therefore expands the scope of research on gender representation in television by using adaptation theory to reveal the intertextual composition of portrayals of women. Many critics have examined intertextuality in film, and some in television, but none have evaluated the role that concepts of adaptation play in constructing representations of women in television, especially in the fields of justice, science, and technology. The main research question is: What is the impact of television on society? I argue that the relationship between television and society is influenced by intertextuality and apply Fredrickson and Roberts’ theory of objectification, in line with Mulvey’s famous concept of the male gaze, to demonstrate how concepts of adaptation enforce the objectifying gaze on women in television and reinforce mostly stereotypical gender roles. This dissertation is composed of an introduction, four chapters, and a conclusion. Using a case-study methodology, I analyze eight American drama television series that exercise adaptation and the gaze, with many passing references made to art, film, and literature that open the landscape of television to its intertextual roots: uncanny doubles in House of Cards and Orange Is the New Black, architexts between drama and detection in CSI: Cyber and Person of Interest, citations of trauma in Criminal Minds and Law and Order: Special Victims Unit, and de(re)compositions of media and society in Wisdom of the Crowd and The X-Files. Four key findings stand out from these case studies: (1) uncanny doubles manifest a spatiality of death around female and/or LGBT characters, (2) architexts between drama and detection form through play to debunk gender role stereotypes, (3) citations of torture make and maintain a visual style of terror on screen, and (4) de(re)compositions of media and society insulate the voyeuristic POV. These findings show that violence against women continues to be eroticized on prime-time, but that adaptation plays a role in making a spectacle of rape and other harms. Several original concepts emerge during the research process to describe the role that adaptation plays in shaping perceptions of gender, sexuality, and violence on television, including but not limited to: embodied detection, figural déjà vu, forensic adaptation, and ludic forensics. All told, this dissertation forges a new way of discussing gender representation by applying adaptation theory to television studies.

Jessica-Leigh Van De Kemp (2021). 'The Objectifying Gaze': The Role of Adaptation in Perceptions of Gender on Television. UWSpace. http://hdl.handle.net/10012/17135