Physiologically Based Pharmacokinetic Modeling of Monoclonal Antibodies in Children 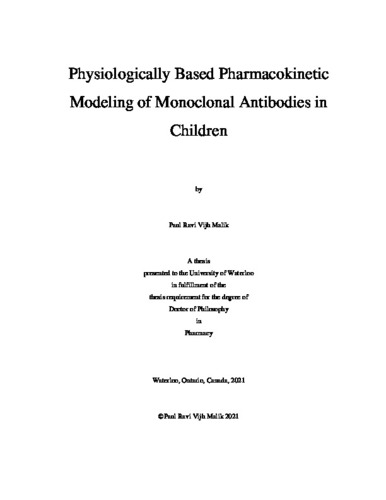 The following thesis chapters chronicle evolving efforts throughout 2016 – 2021 to support research toward improving the pediatric clinical pharmacology of monoclonal antibodies (mAbs). Translating the benefits of successful mAbs from adults to children (and even infants) has proved challenging since the first attempts in the early 2000s. Children tend to achieve low pharmacokinetic exposures and poor efficacy when the adult dose is scaled to children by body weight alone (mg/kg), with infliximab as the main example of this case. Physiologically-based pharmacokinetic (PBPK) models were selected as the tool of choice to explore this discrepancy based on their established success with pediatric extrapolation for small molecule drugs. PBPK models enable mechanistic representations of drug disposition in virtual individuals and can be used to identify the drivers of altered pharmacokinetics in anatomically or physiologically distinct special populations, such as children. The early chapters review the state of the field and the mechanistic underpinnings of mAb pharmacokinetics, and an example of an adult PBPK model for trastuzumab is provided. An open-source model for large molecule drugs was launched in 2018 inside the Open Systems Pharmacology software package, and shortly thereafter we trialed the use of this model to predict infliximab pharmacokinetics in children 4 – 17 years of age. Scaling pharmacokinetics to children by size alone failed to correctly predict the pharmacokinetics in this population, suggesting that other factors were at play. Therefore, a comprehensive review was conducted to generate physiological hypotheses to explain the observation with particular attention to infants (< 2 years of age), where the pharmacokinetic differences are most drastic. The following hypotheses were proposed: 1. The fraction of extracellular fluid volume in the body decreases with age and provides large weight-normalized volumes of distribution in infants. 2. Extravasation of antibodies into tissues occurs quickly in infants as they have a large capillary surface area per unit volume available for plasma protein exchange and a large proportion of “leaky” tissues, where capillary permeability is highest. 3. A fast rate of lymph flow in infants drives a fast rate of absorption after extravascular administration. 4. Infants have higher concentrations of circulating hematopoietic cells, which may contribute to extensive cellular uptake and fast elimination. 5. Intracellular metabolism and elimination may be increased due to low expression of FcRn – the neonatal salvage receptor – and the relatively high concentration of endogenous IgG competing for FcRn binding after birth. In 2019, the first four hypotheses were integrated into a PBPK model for mAbs in premature infants that was successful for characterizing pharmacokinetics in infants even 1 day old at 28 weeks gestational age. However, this parameterization was based on the mechanistic understanding of mAb disposition at that time, and it was destined for change. The results of the latest experiments in mice with site-specific FcRn deletion and macrophage knockdown prompted a reinvestigation of the contribution of hematopoietic cells – in particular monocytes and macrophages – to mAb pharmacokinetics. In this work, the role of the macrophage is redefined to a highly efficient protector of IgG, rather than an eliminating cell. A model-based analysis of the data revealed that it is very unlikely that a high concentration of circulating monocytes can contribute to explaining the fast weight-based clearance of mAbs in very young children. In the end, four of the five hypotheses remain, and the investigations continue. Pediatric extrapolation for mAbs is a modestly more achievable task because of the efforts herein, hopefully improving outcomes for this vulnerable population in the future. Other contributions of the thesis include highlighting the influence of cancer and inflammatory disease states on mAb pharmacokinetics, proposing an empirical exponent for scaling volume of distribution to children and formalizing a foundation of pediatric literature on which this field can continue to grow.