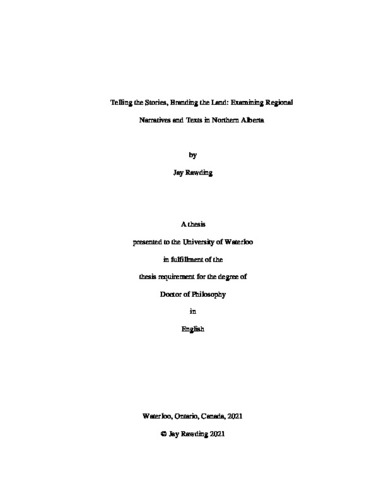 This ecocritical study analyzes literary works and narratives related to northern Alberta. It establishes correlations between the way the land, history, and culture have been represented in these buried texts and the master narrative of resource development that continues to dominate this highly contested region. Using an interdisciplinary approach to this understudied content, this investigation combines rhetorical and discourse analysis with ecocritical close readings. The dissertation initially explores recurring themes in northern Alberta’s literature and then examines specific narratives concerning three men who have remained popular in the region: A.M. Bezanson, “Twelve Foot” Davis, and “Peace River Jim” Cornwall. While their legacies have endured, the thesis addresses the fact that other important texts that were written by women – such as Mary Lawrence, Katherine Hughes, Dorothy Dahlgren, and Alvena Strasbourg – have become scarce and obscure. After comparing the gendered perspectives contained in these texts, the discussion turns to authors who have been affiliated with fossil fuel development, including petroleum pioneer Sidney Ells, investigative trailblazer Larry Pratt, and industry ally J. Joseph Fitzgerald, who each helped rhetorically define, confront, or embrace local infrastructure projects. Next there is an analysis of three novels that engage with stock genres in order to present their stories, including a northern Alberta-based thriller written in 1980 by best-selling author Alistair MacLean. The thesis concludes by examining two influential local newspaper editors who, through their popular books, became self-appointed gatekeepers of the region’s voices. This example of authorial control over northern Alberta’s published texts speaks to an urgent need to recover, reproduce, and republicize neglected local stories and texts in order to challenge broader hegemonic forces and to better understand this region and its people. This dissertation intervenes to offer a critical starting point in recognizing, reading, and disseminating these vital voices now and in the future.