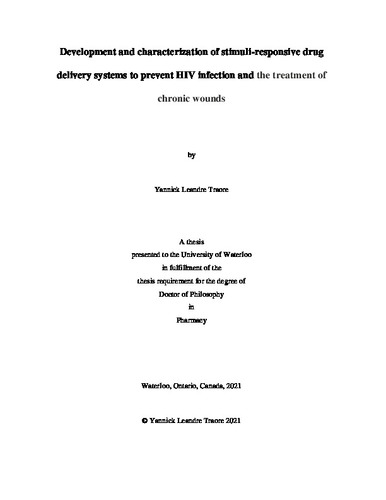 Patient compliance is very important and highly depends on the drug dosage form which correlates with the success of therapy. Drug delivery systems can be adapted to different pharmaceutical ingredients and to different delivery routes depending on the application. This thesis focuses on the development and characterization of different types of drug delivery systems with a focus on stimuli-responsive biomaterials. Stimuli-responsive biomaterials are a promising approach for achieving on-demand drug release. They are intended to deliver their active compound at the appropriate time and site of action in response to specific triggers. The aim of this thesis was the development and characterization of a pH-responsive intravaginal ring (IVR) and a thermo-responsive wound dressing. The IVR is intended for the prevention of HIV infection while the wound dressing is to treat chronic wounds that develop as a co-morbidity associated with immune-compromised patients. The behavior of polyvinyl alcohol (PVA) films containing nanoparticles (NPs) for vaginal drug delivery was evaluated first. In this study, we demonstrated that the amount of NPs had little effect on film dissolution and on the storage and loss modulus. However, the percentage of PVA used and the amount of plasticizer (polyethylene glycol) and carrageenan (a film-forming agent) greatly affected the physico-mechanical properties of the film and play an important role in film dissolution time and nanoparticle (NP) release. Secondly, we fabricated an IVR with polyurethane HP-60D-35 containing hydroxychloroquine (HCQ) as a prevention strategy against HIV. The safety of the IVR and HCQ were assessed on the vaginal epithelial cells VK2/E6E7, the ectocervical cells ECT1 and more importantly, on vaginal normal microflora lactobacillus crispatus and jensenii. No significant toxicity was observed. We then designed a segmented IVR with half of the ring delivering HCQ while the second-half was coated with a pH-responsive polymer to deliver anti-CCR5 siRNA NPs. HCQ was released continuously for over 25 days with a mean daily release of 31.17±3.06 µg/mL. Anti-CCR5 siRNA NPs were released from the pH-responsive coated segment only when the pH was 7.3 (e.g. in the presence of simulated seminal fluid) with a total release of 5.12 ±0.9 mg compared to vaginal fluid simulant alone (0.42 ±0.19 mg). Anti-CCR5 siRNA NPs knocked down CCR5 gene expression by 83±5.1% in vitro in the CD4+ T-cell line Sup-T1. In the second part of the thesis, we made a thermo-responsive wound dressing using gelatin crosslinked with chitosan. LL37 and vancomycin were encapsulated into solid lipid nanoparticles (SLN) and mixed into the gelatin-chitosan hydrogel. The hydrogel itself liquefied rapidly (30min) at 33ºC (human skin temperature) than at room temperature (remained semisolid). We evaluated LL37/vancomycin-SLN using a microtiter plate-based biofilm assay formed using S. aureus. 6mg/mL of LL37/vancomycin was capable of significantly reducing S. aureus biomass. Overall, the development of stimuli-responsive drug delivery systems is appealing as it can release drugs only when needed, which will reduce toxicity and unwanted side-effects. Furthermore, it can potentially improve patient compliance resulting in improved therapeutic efficacy.