A Floating Ball and Two Asymptotic Problems in Capillarity 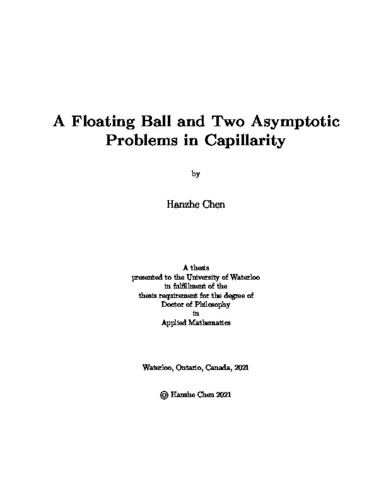 The study of capillary phenomena can be traced back to the age of Aristotle. In this thesis, a floating ball and two asymptotic problems in capillarity are considered, all of which include surface tension and gravity. The first problem, the ascent of fluid surface outside a narrow vertical circular tube has been studied for decades. Lo obtained a five-term asymptotic expansion of the fluid height near the boundary for the small Bond number using the method of matched asymptotic expansions. Miersemann gave a rigorous proof of a two-term asymptotic expansion but the error bound he obtained is inferior to Lo's. We reconsider this problem and our goal is to establish a rigorous approach to improve Miersemann's error bound. We construct two piecewise smooth approximate solutions. Each approximate solution consists of an inner solution and an outer solution. The first approximate solution with its inner solution having zero mean curvature is shown as an upper bound. The second approximate solution with its inner solution having constant mean curvature is shown as a lower bound. The approximations are optimized in terms of the transition radius $q$ by use of Olver's theorem. This establishes the two-term asymptotic expansion. Its error bound is an improvement of Miersemann's but is inferior to Lo's. A modification of the outer solution helps improve our error bound. However, we did not achieve Lo's error bound. Interest in floating objects goes back to antiquity. In recent research, many examples of multiple equilibrium configurations have been found with or without surface tension and gravity. We consider a ball floating on an unbounded reservoir. The floating configuration is assumed to be radially symmetric. By a result of Elcrat, Neel and Siegel, the fluid interface is determined by the attachment radius $r_0$ and inclination angle $\psi_0$. Both of these are given in terms of the attachment angle $\phi_0$. However, the zero solution is not included in the parametric solution. So, the graph description of the fluid height is considered, as well. We develop $C^1$ smoothness of the attachment height $u_0$ with respect to $\phi_0$. This requires an extension of Vogel's description of solutions and monotonicity results. As a by-product, Vogel's conjecture on the smoothness of the envelope of exterior solutions is shown. In the study of the number of equilibria and their stability, both force and energy approaches are considered. We classify forces and energies and establish a relation between the total force and the total energy. This requires determining the asymptotic expansion of the interface as the inclination angle tends to zero, which is achieved through the use of Levinson's theorem. A critical point of the total energy can be either a force balanced point or a critical point of the height of the center. Both the total force and the center height contain $u_0$, which has to be found numerically by the shooting method. In order to understand the behavior of the total force and the height curves, both asymptotic analysis and numerical tests are employed. We investigate the limiting behavior of the total force and the height curves for small and large Bond number or when the attachment angle tends to its end points. We perform thousands of numerical tests with different values of Bond numbers and contact angles. Combined with the numerical observations and the results from the asymptotic analysis, we conjecture that there are at most two force balanced points. If there is only one force balanced point, it must be stable. If there are two force balanced points, the one with smaller attachment angle must be stable and the other one with larger attachment angle can be either stable or unstable. For a given contact angle, the information on the number of equilibria and their stability for the floating ball system are illustrated in Bond number versus density ratio figures. We give several such figures with typical contact angles. Finally, two examples are presented. One admits two stable equilibrium configurations. Another example shows a case with no force balanced point where there is an energy minimizer. This prompts discussion of the necessary condition for the floating configuration and a modification of changing topological structure for the floating configurations in this example.