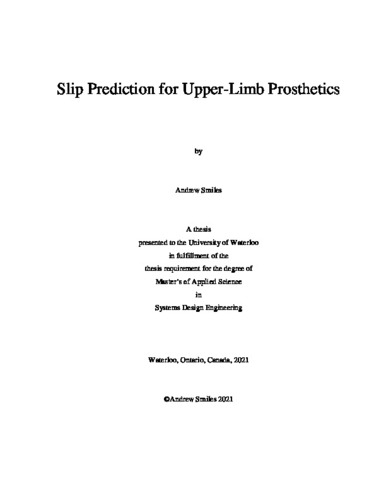 Amputees have greatly benefitted from improved prosthetic technologies, increasing dexterity, degrees of freedom, and attachment to the body, however sensory feedback has made comparatively little improvement. Osseointegration has been shown to produce a transcutaneous pathway to allow for long term stable invasive electrical stimulation [1], [2]. The need for useful prosthetic feedback has been pre-existing, however now there is the capability for prosthetics to begin recreating lost sensations through neural stimulation. This thesis investigates the ability to create a slip prediction system, in a currently existing and widely used commercially available prosthetic hand. This slip prediction system is designed to alert the user before slip begins to occur to maximize potential usefulness. Two methods of stimulation are compared to a no-stimulation baseline in execution of a task designed to induce slip. Improvements are indicated through a reduction in number of slips, and improved understanding of grip capabilities, shown by prosthetic movement planning within grasp limits. One stimulation condition delivers a single rapid stimulation “spike” as slip becomes more likely. The other stimulation condition delivers a continuous stimulation, with amplitude proportional to slip likelihood. The predictor is shown to have a prediction accuracy of 69% when used with feedback. Slips across all four participants were shown to be reduced by stimulation, as 53 slips occurred using no stim, 37 slips occurred using the spike feedback, and 31 slips occurred using the amplitude feedback; however this decrease was not shown to be statistically significant. This indicates that the neural stimulation slip prediction delivered in this thesis, provided additional and actionable information even when the participant could see, hear, and freely move the prosthesis.