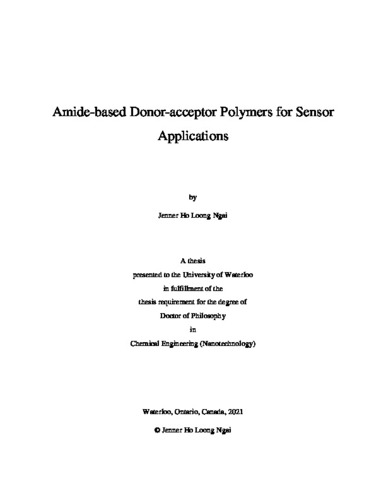 Organic semiconductors, especially polymerized organic semiconductors, are suitable for manufacturing low-cost electronic products on flexible lightweight substrates through a high throughput roll-to-roll printing process. In particular, research into sensor devices based on organic semiconductors has drawn much attention in recent years due to the escalating demands for ubiquitous sensor devices for the Internet of Things (IoTs), smart food packaging, point-of-care devices, etc. Organic semiconductor (or organic)-based sensors have demonstrated promising performance towards a variety of analytes such as volatile organic compounds (VOCs), H⁺, biological compounds, temperature, pressure, and metal ions. However, they still have poor long-term stability, unsatisfactory reversibility, and low selectivity. This thesis aims to address these issues through the development of novel donor-acceptor (D-A) semiconducting and conductive polymers, which contain amide building blocks, namely indigo (ID), diketopyrrolopyrrole (DPP), and hemi-isoindigo (HID), for fluoride ion sensors, volatile organic liquid sensors, and temperature sensors. Several strategies have been used to improve senor performance: 1) Embedding intra- and intermolecular hydrogen bonds to improve the mechanical stability, sensitivity and selectivity; 2) Introducing thermally removable side chains to afford the polymer films excellent solvent resistance through a simple post-deposition thermal treatment; 3) Increasing the HOMO energy levels of polymers to improve the long-term stability of the doped polymers. First, ID was chosen as the acceptor unit to pair with the bithiophene donor unit to develop an ID-based semiconductor D-A polymer PIDG-BT-C20, which is very stable to ambient air and water when used a p-channel semiconductor in organic field effect transistors (OFETs). The remarkable stability of this polymer allows it to be used a channel semiconductor in water-gated organic field-effect transistors (WGOFET), which the polymer is in direct contact with the water gate dielectric. The devices were able to detect halide ions (F⁻, Cl⁻, Br⁻, and I⁻) introduced in the water gate dielectric, achieving a low limit of detection (LOD) down to 0.40 mM for fluoride ions. The intramolecular hydrogen bonds in the ID unit were found to play a key role in achieving the high sensitivity and selectivity of fluoride ions. Then, the strongly electron-withdrawing amide building block DPP was chosen as the acceptor unit and the electron-rich 3,3'-bis(dodecyloxy)-2,2'-bithiophene (C12-BTO) was selected as the donor unit to make a narrow band-gap D-A polymer PDEB, which can be converted into the highly solvent resistant polymer PDNB by thermally removing the carbamate side chains in the DPP unit. The intermolecular hydrogen bonds formed between the DPP units in PDNB can form a physically cross-linked network to improve the morphological stability of the polymer film, and can also increase the wettability of polymer by polar organic solvents. The very high HOMO energy level (-4.68 eV) of PDNB allows it to form a doped polymer complex PDNB:HCl with excellent long-term stability (up to 9 moths). This doped film was used as the active layer in low-voltage driven chemiresistive sensors, and distinguish up to 10 different volatile organic liquids with unique current-time profiles. Lastly, HID was selected as the acceptor unit to copolymerize with C12-BTO donor unit and thiophene spacer unit to develop four hemi-isoindigo-based D-A polymers for chemiresistive temperature sensors. The use of thermally removable carbamate side chains on the hemi-isoindigo unit can help forming intermolecular hydrogen bonds, which can afford excellent solvent resistance and morphological stability. Due to their high HOMO energy levels (ranging from -4.69 eV to -4.47 eV), these polymers can be doped by F4TCNQ to form moderately conductive films, which are suitable as channel materials for chemiresistive temperature sensors. It was found that the thiophene spacer unit has a great influence on the thermal sensitivity and long-term stability of the doped polymer complex. The doped film PENB:F4TCNQ (where PENB contains the EDOT spacer) has shown the best temperature sensor performance, achieving a high temperature coefficient of resistance (TCR) of up to -1.49 %/°C, high reproducibility/reusability, and excellent long-term stability.