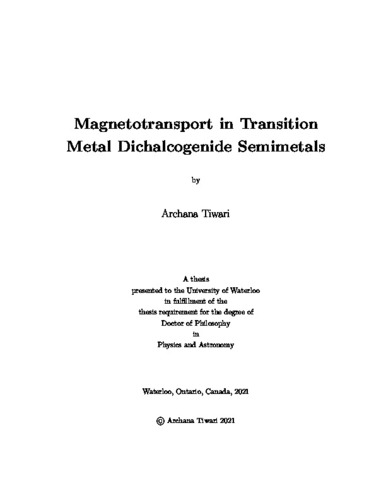 In this thesis, we study the large magnetoresistance in MoTe2, and non-linear anomalous Hall effect in MoTe2 and WTe2. Thin flakes cleaved from layered single crystals exhibit high mobility, and semimetals show nearly compensated electron and hole density. The two combined in a layered semimetallic TMDC show a large and unsaturated magnetoresistance. However, thinning down the sample to a few atomic layers results in a charge imbalance and a decreased mobility, suppressing the overall magnetoresistance. As large magnetoresistance is an important component of various applications, it is important to determine which of these factors are prominent in affecting the magnetoreistance in the thin materials, and potentially modify that factor for 2D XMR applications. To study this, we use thickness tuned magnetotransport measurements on a semimetallic layered TMDC, MoTe2. We use a two-band model to extract mobility and electron-hole ratio from the magnetoresistance measurements. Upon analysing the data over various thicknesses, we conclude that the suppression of magnetoresistance in thin layers is prominently impacted by the mobility. A high mobility in thin layers can be achieved by using a high quality single crystals and providing an atomically at substrate of boron nitride for device fabrication. We also measure Shubnikov de-Haas (SdH) oscillations in the resistivity of MoTe2 at high magnetic field. We analysed the frequency of these oscillations in the inverse of magnetic field to find corresponding signatures of electron and hole pockets on the Fermi surface. The other phenomena we try to explore is the anomalous Hall effect(AHE) in a time reversal invariant system. AHE originates both from the Berry curvature mechanism intrinsic to the material, and spin-orbit coupled impurity scattering processes. A non-zero Berry curvature requires the system to be breaking either of the time-reversal(TRS) or inversion symmetries. While the AHE in TRS breaking ferromagnetic materials has been elaborated upon in literature, a general theory of AHE in IS breaking materials was only recently provided. For inversion symmetry breaking systems, the Hall effects appears as a DC and second harmonic response to the applied current, giving a non-linear anomalous Hall effect (NLAHE). Three dimensional TMDCs, MoTe2 and WTe2, are non-centrosymmetric crystals, where application of in-plane electric field gives a finite NLAHE along the c-axis. For measurements, we designed a device with both in-plane and vertical contacts to measure the first and second harmonic responses. To parse different contributions to the NLAHE, we rely on the scaling relation between the NLAHE strength and longitudinal conductivity. We provide a scaling with conductivity by changing the thickness and temperature. Our scaling relation shows that the NLAHE is dominated by skew scattering contribution along with a new exponential dependence on conductivity at low temperatures. Finally, to put this work in context with the existing AHE results, we measure the Hall ratio and Hall conductivity.