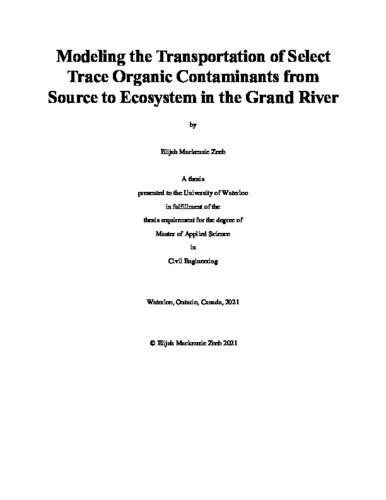 Trace organic contaminants (TOrC) have been observed in waters downstream of wastewater treatment plants (WWTP) in the Grand River in southern Ontario, Canada. These contaminants have been correlated with adverse impacts on aquatic ecosystem health. This study aimed to create a unified modeling framework for predicting the generation, transportation, and fate of select TOrCs. The TOrCs selected for this study were carbamazepine, naproxen, triclosan, and venlafaxine. These contaminants were chosen based on their degradation properties and on the availability of measured concentration data in WWTPs and in the Grand River. The model was set to extend from Waterloo to Ohsweken and to include the impacts of the Waterloo WWTP and the Kitchener WWTP. Modeling of TOrCs took place across three model compartments, which were combined into one source-to-fate model. TOrC generation in the urban sewage system was estimated using a population-based consumption-excretion model. Removal of TOrCs in WWTPs was simulated using conventional steady-state WWTP modeling equations with the sorption and biodegradation TOrC removal mechanisms included. Biodegradation of TOrCs in WWTPs was split into two components: heterotrophic biodegradation by ordinary heterotrophic organisms, and autotrophic biodegradation by ammonia oxidizing bacteria. This approach allowed for the model to account for expected differences in TOrC concentrations in WWTP effluent as a result of nitrification processes. Transportation of TOrCs in the Grand River was modeled hydraulicly using WASP 8.0, with the removal mechanisms of biodegradation and photolysis. The model was run for two time periods: one preceding the implementation of nitrifying upgrades to the Waterloo and Kitchener WWTPs, and one after. Model results were compared with observed TOrC concentration data at WWTP outfalls and at select points downstream in the Grand River. Predicted concentrations of TOrCs near Ohsweken were found to be the most sensitive to autotrophic biodegradation rates in the WWTPs, suggesting that particular attention be paid to modeling this removal mechanism. The model was found to predict some contaminants at concentrations close to observed values, but not others, indicating that further refinement is needed. Removal of TOrCs in the river due to natural processes was particularly under-estimated. More frequent measurements of TOrC concentrations in the Grand River and in WWTPs would allow for a better calibration of the model.

Elijah Zeeb (2021). Modeling the Transportation of Select Trace Organic Contaminants from Source to Ecosystem in the Grand River. UWSpace. http://hdl.handle.net/10012/17070