The Association Between Functional Social Support and Memory: A Prospective Analysis of the Canadian Longitudinal Study on Aging 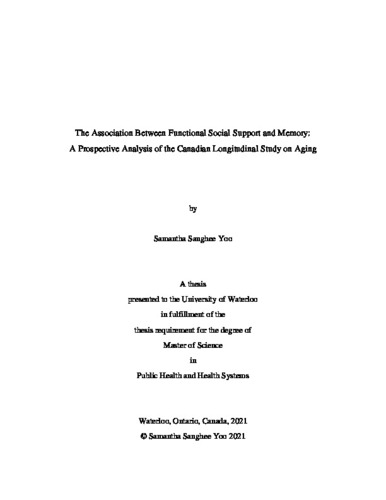 Identifying modifiable psychosocial factors that influence age-related outcomes is important for healthy aging. Functional social support (FSS), or the perceived availability of support from others, appears to delay memory loss via biological and psychological pathways. However, due to the complexity of measuring FSS, evidence is limited regarding its association with memory. Objective of this thesis was to identify an association between FSS and change in memory using baseline and 3-year follow-up data from the Comprehensive Cohort of the Canadian Longitudinal Study on Aging (CLSA), an ongoing cohort study of adults aged 45-85 years at baseline. FSS was measured via the Medical Outcomes Study–Social Support Survey (MOS–SSS); immediate and delayed recall memory were measured with the Rey Auditory Verbal Learning Test I and II, respectively. The RAVLT I and II z-scores were averaged at each time point to compute a combined memory z-score. Multiple linear regression was used for the analysis. The difference between the combined baseline and combined follow-up memory scores was regressed on the FSS variables (overall and four subtypes), which were categorized into high (scores ≥ 4) or low (scores ≤ 3), while controlling for baseline memory scores, sociodemographic variables, health variables, and lifestyle variables. The analytic sample comprised 12,011 participants (mean age = 61 years). The participants reported high levels of FSS (overall FSS: weighted mean = 4.34 out of 5.00 [standard error = 0.01]; weighted median = 4.46 [interquartile range = 0.88]). Fifty-seven percent of the weighted sample reported declines in combined memory scores over three years. Regression models indicated weak yet generally positive associations between overall and subtypes of FSS and positive changes in memory score over three years, although most regression coefficients were not statistically significant (α = 0.05). No clear pattern of effect modification was identified across the age and sex groups in stratified regression models. CLSA participants were cognitively stable and most reported a high level of FSS, which likely contributed to the weak and non-significant associations between FSS and change in memory scores. A substantial attrition of participants with RAVLT measurements may also have contributed to the lack of significant associations. Longer follow-up of the CLSA sample is likely required to further assess this association.

Samantha Sanghee Yoo (2021). The Association Between Functional Social Support and Memory: A Prospective Analysis of the Canadian Longitudinal Study on Aging. UWSpace. http://hdl.handle.net/10012/17063