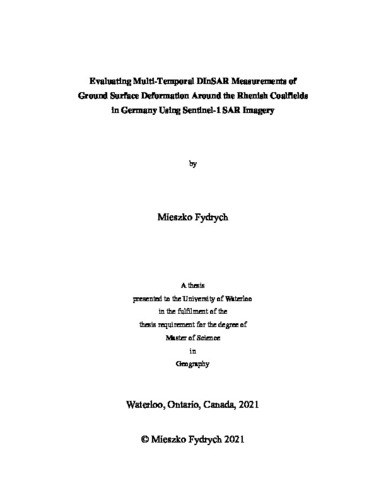 Ground surface deformation caused by land subsidence is a critical aspect when assessing safety and environmental impacts of open-pit mining operations. These mining-induced deformations can cause severe damage to local infrastructure and buildings located in the region. Monitoring mining operations using traditional techniques is laborious, costly and time consuming, with many locations being difficult to access. As a result, in-situ observations of surface movement and structural stability are often sparsely completed along areas of high risk or concern. Remote sensing observations facilitate a reliable, temporally and spatially continuous monitoring process of mining operations, regardless of physical accessibility, at large scales with minimal cost. In this study, two commonly used C-band Differential Interferometric Synthetic Aperture Radar (DInSAR) methods, namely Small Baseline Subset (SBAS) and Persistent Scatterer Interferometry (PSI), are applied to Sentinel-1 data to show consistency when observing land displacement in the Rhenish coalfields region in Germany. Deformation rates around the Rhenish coalfields are assessed for 2015 and 2016, independently, using both techniques and compared using GNSS station data of three nearby stations part of the EUREF network. The primary focus on this study is to determine the performance differences between the two techniques. The PSI deformation estimates showed significantly lower variation in measurements but had a severely limited spatial coverage compared to the SBAS estimates. Comparison of annual deformation rates measured by the two techniques showed a stronger agreement for 2016 (RMSE = 8.7 mm/year) than 2015 (RMSE = 26 mm/year). The discrepancy between annual comparisons is caused by overestimation of surface subsidence rates by the 2015 SBAS measurements. This overestimation is likely the result of atmospheric artefacts propagating into the phase unwrapping due to a lack of sufficient SAR scenes available in 2015. It was determined that the SBAS technique benefits more heavily from additional data and when data is limited, the PSI technique proves to be more reliable for measuring annual deformation rates. Despite this, both techniques observed similar overall deformation patterns across the landscape but reported different magnitude of deformation; commonly observed in other studies. The two methods showed stronger agreement over targets characterized as hard impermeable surfaces (e.g. built-up areas). Although only one of the three publicly available GNSS sites coincided with the InSAR study domain, when compared with base station GNSS sites, the DInSAR estimates are within the uncertainty range of the GNSS measurements, indicating good potential. This thesis illustrates the applicability of using satellite remote sensing observations to monitor mining-induced surface deformations to supplement traditional monitoring techniques.