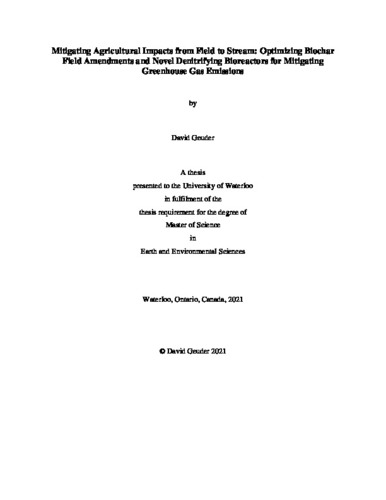 Greenhouse gas (GHG) emissions resulting from agricultural activities are a major contributor to total emissions in Canada and around the world. The application of synthetic and animal-manure fertilizers is common practice on agricultural fields and leads to the generation of the GHGs carbon dioxide (CO2), methane (CH4), and nitrous oxide (N2O). Among these GHGs, N2O from direct soil emissions is of great concern because of the outsized contribution of this GHG to total agricultural emissions, as well as the global warming potential which is 298 times that of CO2. In addition to GHG emissions, the application of fertilizers to soil can result in the leaching of nutrients to groundwater and tile-drainage effluent, which will discharge to surface water and cause eutrophication and other water quality degradation impacts. There is a need for action at the field level to address these deleterious impacts of agriculture which has led to calls for the development and implementation of best management practices (BMP) that are feasible for farmers and growers. This thesis describes two components which may aid in the development of said BMPs: (1) a soil amendment experiment which compared the year-over-year GHG mitigation of differing biochar schedules, specifically focused on addressing the potential mitigation loss described in previous studies; and (2) the design and construction of a novel passive multi-component bioreactor which will be used in future research to treat tile-effluent for a variety of agricultural contaminants, including nutrients, pharmaceutical compounds, and veterinary antibiotics. Biochar amendments have been shown to have positive impacts on soil health and crop productivity, and more recently has been found to suppress the emissions of GHGs when biochar is applied as a co-amendment with fertilizer on agricultural fields. Broadly speaking, larger biochar amendments have been linked to greater emissions reductions, however, some research has found that this GHG mitigation decreases with time. This study examined the emissions of CO2 and N2O from four microplots in the Winchester area of southern Ontario, Canada following the application of liquid swine manure and biochar in different volumes on each plot. The trials took place over two field seasons and these amendment schedules were selected to observe the impact of biochar aging on GHG emissions between years. In both years the first plot (control) received no amendment, the second plot (MO) received manure only, the third plot (LVBC) received manure and a small volume of biochar each year, and the fourth plot (HVBC) received manure plus a large volume of biochar in the first year and manure only in the second year. Carbon dioxide emissions were found not to be impacted by the addition of biochar in the amendments, nor was there any observed impact of biochar aging. Nitrous oxide emissions showed reductions in the first year, with lower emissions observed for the microplot with the high-volume amendment. In the second year, however, there was no significant difference in N2O emissions between the microplots with biochar amendments. Biochar applications contribute a large amount of carbon to the amended soil, which is reflected in the pore-water alkalinity and DOC measurements. These amendments are thought to have impacted both N and C availability for denitrifying microorganisms. These results suggest that the addition of fresh biochar in smaller volumes may provide a robust alternative to the conventional single application of large volumes of biochar while achieving the similar GHG reductions over time. Bioreactors are effective in treating nutrient laden water and have also shown success in treating other contaminants when additional reactive materials are included in the bioreactor fill. The design and construction of this bioreactor included several novel changes that sought to address the limitations of conventional woodchip bioreactors. The addition of biochar to the fill material was included to lower the emission of N2O gas emissions, which occur as a bioproduct of the denitrification process. Biochar and zero-valent iron were also included to treat the effluent water to remove veterinary and pharmaceutical compounds which can be found in field amendments. These bioreactors will be used in future research at the Winchester field site. This thesis will help inform the development of future BMPs for agricultural producers to reduce their impacts from field to stream. This thesis demonstrated that even small volumes of biochar can lower emissions by substantial amounts over time, allowing for lower costs to farmers and greater ease of application. Further research is needed to determine optimal biochar co-amendment volumes and schedules, as well as to determine the bioreactor effectiveness.