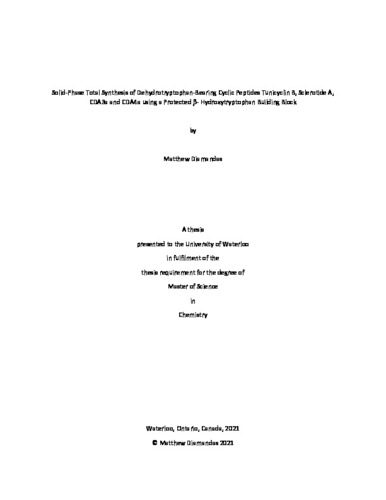 The non-proteinogenic amino acid Z-dehydrotryptophan can be found in a several naturally occurring peptide. Amongst them are cyclic peptides such as tunicyclin B, the antifungal agents keramamide F and sclerotide A, as well as the antibiotic telomycin and the calcium-dependent antibiotics (CDAs). Despite there being numerous means of accessing simple Z-dehydrotryptophan building blocks, it was only recently that the first synthesis of a Z-dehydrotryptophan peptide containing more than two amino acids was reported. However, the synthetic method reported in this study is labor-intensive and not practical for rapid synthesis of Z-dehydrotryptophan containing peptides. In Chapter 2, a new and highly efficient approach to the synthesis of Z-dehydrotryptophan peptides is initially described. This approach uses Fmoc-β-HOTrp(Boc)(TBS)-OH as a building block, which is readily prepared in high yield and incorporated into peptides using solid-phase Fmoc chemistry. The TBS-protected indolic alcohol eliminates during global deprotection/resin cleavage to give Z-dehydrotryptophan peptides exclusively as the thermodynamically favored Z-isomer. This approach was applied to the solid-phase synthesis of tunicyclin B and sclerotide A which were prepared in 28 % and 24 % overall yields respectively. In Chapter 3, this method was used in the solid-phase synthesis of more challenging targets which included biologically active CDA3a and CDA4a which were prepared in 6 % and 8.5 % overall yields respectively. Furthermore, using a similar solid-phase approach, two CDA analogs, which contain either Trp or Kyn in place of the Z-dehydrotryptophan of CDA4a, were prepared. The antibacterial potencies of CDA3a, CDA4a and these CDA analogs were assessed in order to assemble a preliminary structure activity relation (SAR) study. Finally, early biological studies were conducted on Z-dehydrotryptophan containing CDA4a in order to begin to decipher the CDA’s biological mechanism of action (MoA). Chapter 4 offers general conclusions about the work within this thesis. Furthermore, the chapter presents recommendations for future work to be conducted in a continuation of the findings outlined within this thesis. They include pursuing the synthesis of other, complex Z-dehydrotryptophan containing peptides as well as preparing further CDA analogs in order to conduct a thorough SAR study on this class of compounds.