Lignin derived nano-biocarbon: its deposition on polyurethane foam for wastewater dye adsorption and as a filler for composite applications 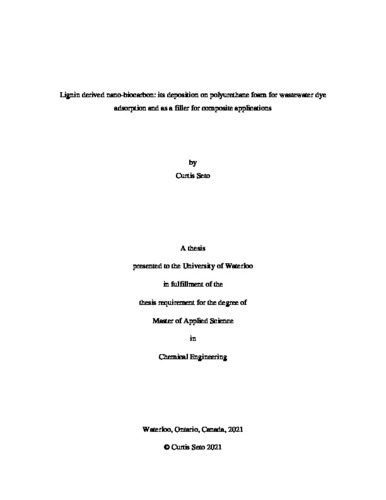 The use of natural biopolymers has seen a resurgence, due to their performance in natural organisms and biodegradable properties from an environmental perspective. As countries around the world continue to implement green policies, natural biopolymers will undoubtedly be a part of the solution that enables such a transition. Lignin is produced in large quantities as a by-product in lumber industries such as in pulping processes and has historically been only utilized in low-value applications, such as being burned for fuel. However, studies have shown that value-added applications for lignin can be developed due to its high carbon content, and high thermal stability. As such, the valorization and use of lignin has been the subject of extensive research. In this thesis, research on the fabrication of lignin nanoparticles from pristine lignin (LN) and its modification via freeze-drying to produce nano-based freeze-dried lignins (NFLN) was investigated. LN and NFLNs were then carbonized to produce biocarbons. Characterization was performed on the LN and NFLN materials, prior to and after pyrolysis, with focus towards morphology and functionality. It was determined that the overall pre-treatment process imparted primarily a morphological change, and left the materials functionally similar as confirmed by Field Emission Scanning Electron Microscopy (FE-SEM), Fourier transform infrared (FTIR) spectroscopy, thermogravimetric analysis (TGA), elemental analysis and through analysis of the pyrolysis data. The properties of the biocarbons demonstrated promising properties for use as a biobased carbon for material applications. The LN and NFLN biocarbons were deposited on to polyurethane (PU) foam to produce LN-PUs and NFLN-PUs. The cationic dye adsorption properties of biocarbon coated PUs were investigated using ultraviolet-visible spectroscopy (UV-vis) to determine removal efficiencies. It was found that at a dye concentration of 10 mg/L, the NFLN-PUs removed more dye at 83.3% removal efficiency in comparison to the LN-PUs with 59.5% removal efficiency. This improvement in the performance of the NFLN biocarbons was attributed to the lower zeta potentials, indicating higher affinity for the adsorption of the positively charged dye. Furthermore, preliminary work into the use of LN biocarbon in composite applications was performed by incorporating it in natural rubber (NR) films. At loading levels of 5 and 10 phr, it was found that improvements in tensile and tear properties were observed, along with an increase in modulus. Overall, the use of LN and NFLN biocarbons show promise for use in adsorbent, coating, filler and pigment applications. Future work can involve the optimization of the described studies and be further extended to other polymer systems.

Curtis Seto (2021). Lignin derived nano-biocarbon: its deposition on polyurethane foam for wastewater dye adsorption and as a filler for composite applications. UWSpace. http://hdl.handle.net/10012/17050