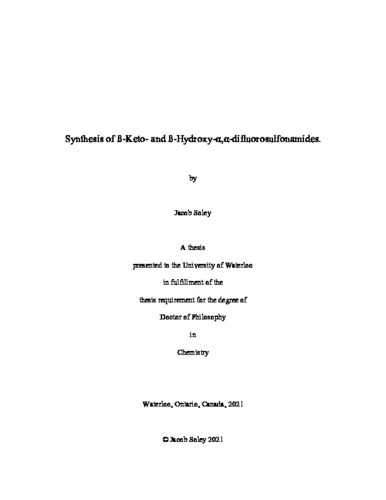 Abstract ß-Keto- and ß-hydroxy-α,α-difluorosulfonamides are both underexplored classes of molecules. There is only one report of each class of molecules in the literature, however very similar molecules are well known and are biologically active therefore we expect ß-Keto- and ß-hydroxy-α,α-difluorosulfonamides to be useful inhibitors of enzymes, especially proteases. We have developed an efficient synthesis of ß-hydroxy-α,α-difluorosulfonamides via electrophilic fluorination of ß-ketosulfonamides which are derived from the reaction of N-protected α-amino acid methyl esters and methanesulfonamide carbanions. Both steps proceed in high yield without epimerization. Several protecting groups were investigated for the sulfonamide nitrogen and both dimethoxybenzyl and diphenylmethyl groups could be removed cleanly under mild conditions. A new synthesis of difluoromethanesulfonamides has been developed which does not rely on expensive ozone depleting reagents. An investigation of difluoromethanesulfonamide carbanions revealed a dramatic dependence of stability on the cation with potassium and sodium salts being more stable than lithium. Difluoromethanesulfonamide carbanions reacted with aldehydes and ketones to give ß-hydroxy-α,α-difluorosulfonamides. Yields were high with nonenolizable substrates and lower with enolizable carbonyls. Excellent yields were obtained using 9-phenyl-9-fluorenyl protected α-amino aldehydes and, by using doubly protected N-benzyl-N-9-phenyl-9-fluorenyl-α-aminoaldehydes, excellent dr could be obtained. The reaction was extremely rapid and was complete within a few minutes, even at -128 °C. The above synthesis required the use of the 9-phenyl-9-fluorenyl protecting group. However, we found that literature methods for the introduction of this group were unsatisfactory due to long reaction times, variable yield, and toxic reagents. We investigated new conditions using a combination of phenylfluorenyl chloride, silver nitrate, and N-methylmorpholine which gave excellent yields of protected amines within 1 hour. By using TMS protecting groups the reaction could be extended to free amino acids. This approach also gave high yields rapidly with alcohols and carboxylic acids. Meanwhile thiols, sulfonamides, and amides reacted better with a mixture of 9-phenyl-9-fluorenyl alcohol and BF3·Et2O. The IgA1 protease is an important virulence factor which contributes to diseases caused by a diverse group of bacteria. We investigated the synthesis of a series of chromogenic substrates that may be used to assay this enzyme and are derived from its natural substrate. We also investigated a series of peptidomimetics bearing C-terminal ß-keto- and ß-hydroxy-α,α-difluorosulfonamides, trifluoromethyl ketones and alcohols, and boronic acids, which we expect to be inhibitors of the enzyme. These inhibitors may lead to new to antivirulence therapies for the global fight against antibiotic resistance.