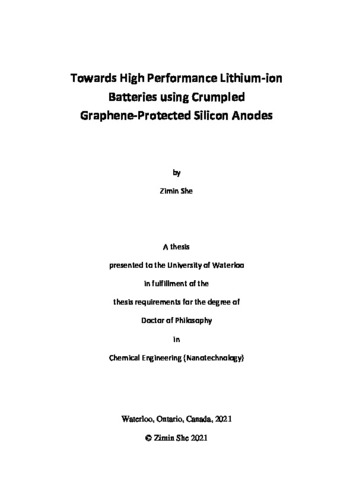 Despite silicon being a promising candidate for next-generation lithium-ion battery anodes due to its high theoretical capacity of 3590 mAh/g (Li15Si4, at room temperature), self-pulverization and the formation of an unstable solid electrolyte interface, caused by the large volume expansion during lithiation/delithiation, have slowed its commercialization. To overcome these challenges, this thesis aims to design a stable and deformation-resistant crumpled reduced graphene oxide (rGO) shell to accommodate the severe volume expansion/shrinkage of silicon during lithiation/delithiation and meanwhile limit the exposure of fresh silicon surface to the electrolyte. In the first experimental chapter, a comprehensive study was conducted to understand the effect of basic spray drying conditions (including nitrogen flow rate, dispersion concentration and mass ratio of rGO/silicon) on the physical morphology and electrochemical performance of the resulting electrode material. Although the optimized crumpled structure exhibited significantly improved rate performance and cyclic stability, it was hypothesized that the crumpled rGO shell may not be mechanically robust enough or leak-tight enough to buffer the volume expansion alone and prevent direct exposure of the electrolyte to the silicon anode. Therefore, we further expanded on the crumpled rGO approach by sealing the graphene shell with an additional layer of polydopamine. As demonstrated by a significant improvement to the initial coulombic efficiency (76.3% from 57.2% for the bare silicon control) and a remarkable cycle life with the anodes exhibiting a capacity of 1038 mAh/g after 200 cycles at 1 A/g, this approach indeed improved the structural stability of the shell and helped to reduce the amount of solid electrolyte interface (SEI) formed. The resulting composite displayed a high capacity of 1672 mAh/g at 0.1 A/g and can still retain 58% when the current density was increased to 4 A/g. This work established a comprehensive understanding of the importance of spray drying conditions and how to affect the resulting morphology and battery performance, which layed the foundation for the later thesis chapters. Building on this approach, it was recognized that graphene tightly wraps around the silicon core during the spray drying process and provides little void space for volume expansion of the silicon. Thus, a simple strategy was developed to engineer void-space within the rGO framework which was used to buffer the volume change of Si nanoparticles by incorporating varying amounts of similarly sized polystyrene (PS) nanoparticles in the spray drier feed mixture. The PS completely decomposes during thermal reduction of the GO shell and results in Si cores of varying porosity. The best performance is achieved at a 1:1 ratio of PS/Si, leading to high capacities of 1638 mAh/g, 1468 mAh/g, and 1179 mAh/g at 0.1 A/g, 1 A/g, and 4 A/g, respectively. Moreover, at 1 A/g, the capacity retention was 80.6% after 200 cycles. At a practical active material loading of 2.4 mg/cm2, the electrodes could achieve an areal capacity of 2.26 mAh/cm2. This work further improved the resulting cyclic stability compared to the first work, especially at high mass loading, suggesting that the reserved void space is important even after graphene encapsulation. Moreover, the rate capability was found to be much better after the introduction of an optimal amount of void space, which may have been a result of a thinner, more Li-ion permeable shell and an improved distribution of rGO within the core. The method also reduced the number of processing steps compared to the polydamine sealing approach. However, it still required a high-temperature heat treatment to 800°C and slow ramp rate which negatively impacts potential manufacturability. To eliminate the slow and energy-intensive high temperature step, a novel method was developed whereby a responsive poly (ethylene oxide) - carboxymethyl cellulose hydrogel was incorporated into the core of the crumpled rGO framework during spray drying. Taking advantage of the volume change of the hydrogel in the hydrated vs. dehydrated state, we demonstrated the ability to control the void space within the core which can be spontaneously created by immersion of the powder in water and “locked-in” upon chemical reduction of the GO shell. In this design, the strong interaction between the polymer core and the silicon and rGO and its ionic conductivity were expected to lead to improved performance. This composite displayed impressive cyclic stability, which retained ~ 81.7% of the initial capacity (1055 mAh/g after 320 cycles at 1 A/g with active material loading of 1 mg/cm2. Even at an increased mass loading (2.5 mg/cm2), the areal capacity of this material only dropped from 2.04 mAh/cm2 to 1.61 mAh/cm2 after 200 cycles at 1 A/g. While the rate performance of this composite was not as impressive as the high temperature case, we believe that the low temperature, higher-throughput, aqueous processing method and significantly enhanced cycle-life make the resulting composite promising for commercial applications.