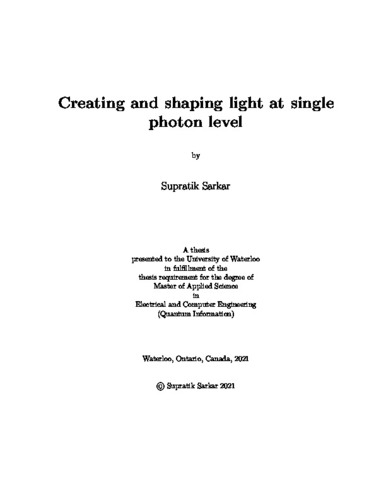 The ability to control light at the single photon level is essential for fully harnessing the power of quantum information theory, and precision measurements. In this thesis, we study two phenomena which can help us to create, and shape light at the smallest scale. In the first part of the thesis, we explore deterministic single photon subtraction based upon single photon Raman interaction of a single three-level Λ-type quantum emitter in a bi-modal cavity or coupled with a chiral waveguide. We study the effect of photon subtraction from different types of optical inputs –- continuous-wave or pulsed coherent states and Fock states, and dependence of the fidelity of subtraction upon key system parameters. We also discuss the suitability and prospects of using different emitter-waveguide systems reported in literature to successfully extract a single photon from an optical input. We find that a quantum dot coupled with a photonic crystal waveguide with high group index could subtract photons with fidelity close to unity. Moreover, we explore how such a SPRINT-based single photon subtraction process can be used to create non-Gaussian states with negative values of Wigner distribution, and negative conditional entropies. Such states can be used as quantum resources in various fields of quantum information theory. Finally, as an interesting example, we also discuss how this mechanism can also be used to create non-classical Fock states of arbitrary photon number. In the second part of this thesis, we study how to shape the emission from a single solid-state quantum emitter, in particular an NV⁻ center in diamond, using two dimensional patterns with sub-wavelength features. We propose a pattern etched on the surface of a diamond sample that enhances the NV's emission in a particular direction, and maximizes coupling with a waveguide substantially far away from the diamond-air interface. Our proposed structure was designed using the adjoint optimization technique, which significantly reduces the amount of computational resources compared to brute-force methods to design an optical element with desired properties. Our structure exhibits a higher directionality of emission compared to other nanophotonic structures reported in the literature -- solid immersion lenses, nanopillars, and bull's eye structures. Finally, we also discuss in details the steps pertaining to setting up a confocal microscope in our laboratory for imaging NV centers, and characterizing our proposed device.