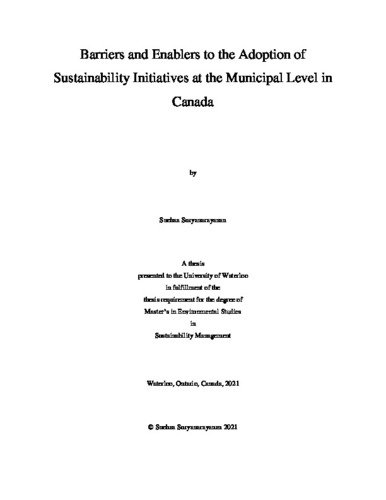 Over the past few decades, there has been increasing importance given to local action to achieve global sustainability goals. Cities and human settlements have been recognized as crucial sites for achieving these common goals, demonstrating the value of local action that serves global and local interests. There has, however, been a gap between recognizing the importance of these municipalities and actual action towards sustainability initiatives at the municipal level. This thesis aims to address that gap by examining the barriers and motivators to the adoption of sustainability initiatives at the municipal level in Canada and also to evaluate awareness of the Sustainable Development Goal (SDG) framework of Canadian municipalities. To achieve this aim, a survey was sent out to municipal authorities from Ontario and British Columbia to gather input on knowledge of sustainability concepts and factors affecting the implementation of sustainability initiatives. Two respondents wanted to elaborate on their responses and agreed to be interviewed. Comparison of descriptive statistics and Mann-Whitney U tests were made to analyze the difference between the provinces for some factors. The responses in the open-ended questions and the interviews were subjected to content and thematic analyses. The most prominent factors affecting the adoption of initiatives in a municipality were the municipality’s size and financial capacity, to which the former is closely related. It was not so much the size in terms of population but what it represented, such as economic resources, personnel, and technical expertise. Other important factors that emerged from the responses included a favorable municipal environment and the influence of regional, provincial, and federal government. Key individuals and networks also emerged as factors but to a lesser extent. The knowledge of the UN’s SDG framework appeared to be low among respondents, while awareness of some sustainability concepts seemed to be present. There was a significant difference between BC and Ontario responses in terms of SDG familiarity and some of the factors affecting the adoption of these initiatives, like key individuals’ presence and perceived advantages to adoption. This study contributes to existing research by identifying barriers and motivators to implementing sustainability initiatives in the Canadian context while updating what we currently know about the factors affecting the adoption of sustainability initiatives in municipalities worldwide. This research also suggests that it is important for regional and provincial governments to work together, treating municipalities as partners in decision-making, to advance sustainability.

Snehaa Suryanarayanan (2021). Barriers and Enablers to the Adoption of Sustainability Initiatives at the Municipal Level in Canada. UWSpace. http://hdl.handle.net/10012/17023