The Weight of Fitting the Description: Using Critical Race Theory to Explore Black and Indigenous Youth Perceptions of the Police 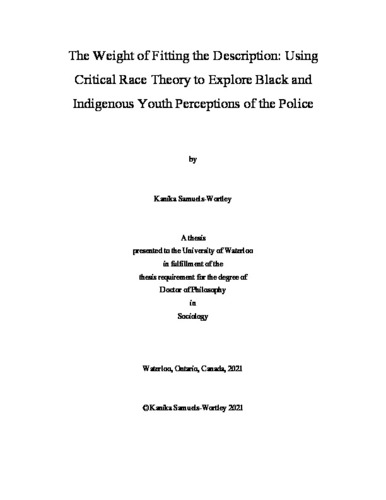 Effective law enforcement is contingent on public support. A growing volume of research examining public perceptions of the police suggest that trust and confidence in the police is very low among youth and specific racialized populations. However, there is a gap in Canadian research that examines the complexities of the relations between racialized youth and the police. The following dissertation employs a mixed-methods approach to explore youth perceptions of the police in Canada. With a focus on a racially diverse sample of Black, Indigenous and White youth, the study aims to examine whether there are racial differences with respect to confidence in law enforcement. Using Statistics Canada’s 2014 General Social Survey (GSS) on victimization (cycle 28), the first study specifically examines Black, Indigenous and White youth’s attitude toward the police. Both bivariate and multivariate analyses suggest that race plays a significant role in identifying Canadian youth's perception of the police. Thus, in Canada, Black and Indigenous youth have lower confidence in the police compared to their White counterparts. Furthermore, a multivariate analysis suggests that gender, geographic location and previous victimization also have an impact on confidence in police. The results of these findings go against Canada’s international reputation as a tolerant multicultural society. However, due to formal and informal bans on the collection of race-based data, little is known about racialized youth perceptions of police within Canada. Thus, to have a better understanding as to why Black and Indigenous youth report negative perceptions of the police, the second study employs the critical race methodology of composite counter storytelling. This approach will highlight the perspectives of Black and Indigenous youth in Toronto, Canada’s largest metropolitan city, and explore their experiences with law enforcement. This aims to counter Canada’s international status as a multicultural utopia and demonstrate how legal criminal justice actors, such as the police, perpetuate the marginalized status of Black and Indigenous youth through the process of criminalization. Continuing a critical race perspective, the final study explores the impact of both negative experiences and perceptions of the police among Black and Indigenous youth in Canada. The findings suggest that as a result of perceived racial bias within policing, Black and Indigenous youth are less likely to report personal violent victimization to law enforcement officials. As a result, I argue that in Canada, due to systemic racial bias within policing, both Black and Indigenous youth are at an increased risk of violent victimization, and thus furthering their vulnerability and marginalization within society. The concluding chapter explores the implications of these findings and policy recommendations for Canadian police agencies.