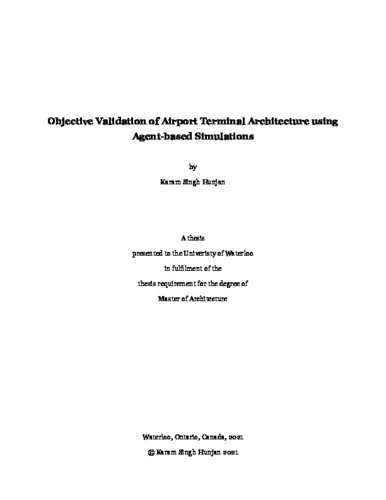 This thesis explores how airport terminal architecture is tested before it is built. The purpose of testing is to make sure an architectural layout aligns with the rest of the airport’s systems. The design of a terminal is a long and expensive process that must accommodate tens of thousands of passengers every hour, the movement of logistics, and control of security. Evaluating spaces for that many people can be difficult to measure, which can result in architects relying on their intuition and experience to judge the impact of a layout for daily operations without objective validation. It is not practical for designers to build a complete airport to see how it works and make renovations after finding aspects that have poor performance. As a result, testing airports requires using mathematical models and simulations to validate how well different systems work together. Designers try to validate architectural layouts in airport terminals by using crowd simulations to approximate passenger behaviour. Existing research in civil engineering and computer science has shown how mathematical models can predict patterns of human activity in the built environment on a large scale. However, these simulations have primarily focused on either modelling passengers as a process flow or people in emergency building evacuation. As a result, existing agent navigation does not consider how passengers use the surrounding architecture for decision-making during daily airport interactions. When passengers enter a terminal for the first time, they can be unaware of what they need to do or how to get there. Instead, passengers rely on using their perception of the environment (the architecture) to inform them what to do. However, there currently are no methods that incorporate architectural perception to validate a building layout in these conditions. This thesis develops an agent-based simulation to validate how well architectural layouts align with the daily operations of an airport terminal. It quantifies the value of a spatial arrangement as a function of people’s interactions in a given space. The model approximates human behaviour based on statistics from existing crowd simulations. It uses spatial analysis, like the isovist and graph theory, for agent navigation and measuring architectural conditions. The proposal incorporates agent perception to provide feedback between people’s decision-making and the influence of the surrounding space. The thesis calculates architectural value using normalized passenger priorities based on typical processing and non-processing airport domains. The success of a terminal layout is dependent on the agent’s ability to complete airport processing and fulfill their priorities. The final value of an architectural layout is determined using statistical methods to provide a probability distribution of likely values. The proposed agent simulation and mathematical models are built using Unity software, which is used to perform several simulation tests in this thesis. Basic functional components of the simulation are validated using existing crowd modelling standards. Tests are also performed to illustrate how different agent perception and priorities influence the value of architectural spaces. Monte Carlo simulations are created for simple terminal layouts to illustrate how changing the floor plan of a security area affects the architectural value for departing passengers. Finally, the architectural values of two real airport terminals are compared against an established passenger experience survey in a basic simulation model. The results of the testing shows that the agent simulation can differentiate between different architectural conditions, within reason, depending on the passengers’ priorities.