Multi-trophic effects of invasive species suppression in a coastal wetland 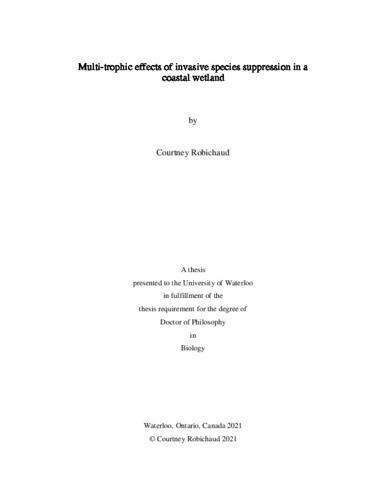 Wetlands provide essential habitat for hundreds of species, including many that are of conservation concern in Canada. In southern Ontario, two wetland complexes, Long Point Peninsula and Rondeau Provincial Park, represent over 70% of the remaining intact wetlands on the north shore of Lake Erie. However, these wetlands are compromised by extensive invasion by non-native Phragmites australis The conversion of these diverse wetlands into monocultures of an invasive species degrades wetland habitat and threatens species at risk. Ecological restoration presents a potential solution, but established invasive species can cause significant challenges to restoration. My research addresses key knowledge gaps regarding the success of P. australis in diverse wetland communities and how herbicide-based control of P. australis affects resident species in freshwater wetlands. The negative ecological impact of P. australis is evident by its rapid spread throughout North America and displacement of native plant species. However, there is a lack of field studies attempting to assess the role of fitness and niche differences (sensu Chesson 2000) in its success as an invader. To quantify niche and fitness difference between P. australis and resident wetland plants, I measured the performance of resident wetland plants with or without above-ground competition from P. australis and modeled the niche region of each species. My results indicated that P. australis intercepts more photosynthetically active radiation (PAR) than resident species, resulting in lower carbon assimilation rates for resident species growing with competition. In contrast, P. australis assimilates carbon more efficiently over the growing season and did not experience negative effects from competition with resident species. Phragmites australis also had the largest niche space of all four species, reflecting its wide range of environmental tolerances – in particular, soil moisture and nutrient levels - that have assisted its establishment throughout North America. Resident species had a high probability of overlap onto the niche space of P. australis, indicating it is excluding resident species from areas where they could otherwise persist. These results provide evidence that the ability of P. australis to reduce the availability of PAR for resident species and more efficiently assimilate carbon over the growing season, combined with high niche overlap, likely directly contributes to its success in North American freshwater wetlands. Bringing this work into a management context, I measured the efficacy of herbicide control and assessed the recovery of native vegetation following the large-scale application of a glyphosate-based herbicide directly over standing water to control P. australis. While herbicide was extremely effective at reducing populations of P. australis across a water depth gradient, passive restoration has resulted in a vegetation community dominated by non-native Hydrocharis morsus-ranae (European frogbit) at many treated sites. Since herbicide treatment began in 2016, Lake Erie water levels have been above average which contributed to the success of this free-floating aquatic invasive species. Finally, as drastic changes to vegetation will alter the way native biota use wetlands, I measured the macroinvertebrate community in sites invaded by P. australis, in herbicide-treated sites, and in remnant uninvaded marsh. Herbicide-treated sites had significantly higher macroinvertebrate densities and low taxonomic richness compared to P. australis-invaded sites and remnant marsh. Herbicide-treated sites had a macroinvertebrate community that was dominated by Chironomidae (Diptera). The sparse emergent vegetation, high water temperatures, and large amounts of decomposing biomass because of P. australis rolling and cutting in herbicide-treated sites likely favored these fast-growing detritivores that emerge from the water’s surface. In contrast, taxa that required a platform (e.g., vegetation) from which to emerge were less likely to be present in herbicide-treated sites. These findings indicate that herbicide treatment in freshwater marsh dramatically changes the macroinvertebrate community composition. Future research should focus on incorporating fitness and niche differences into testing which native species may be able to coexist in a marsh where P. australis is being managed. Additionally, long-term research is required to assess how both native vegetation and macroinvertebrate communities recover from large-scale changes caused by invasive species control. These results together represent a comprehensive ecological assessment of the response of native biota to invasive P. australis and the large scale, herbicide-based control of P. australisin ecologically significant wetlands.