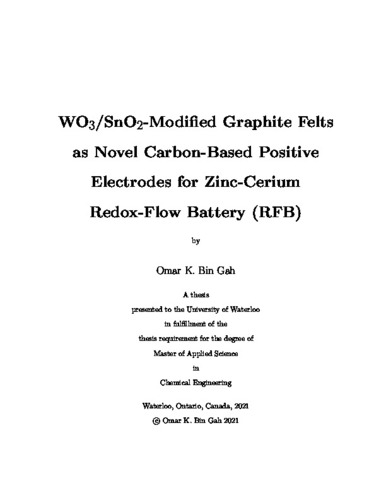 Redox flow batteries (RFBs) are promising large-scale energy storage devices that are potentially cost-effective, easily scaled up in size, safe and versatile. RFBs use the chemical reactions of redox species which are dissolved in liquid electrolytes to store electrical energy when demand is low and deliver it during periods of high demand for electricity. Among various RFBs, zinc-cerium redox flow batteries (Zn-Ce RFBs) have received attention as an attractive energy storage system due to their higher open-circuit voltage (OCV) than any other aqueous-based system that has been proposed. However, the performance of Zn-Ce RFB must be enhanced if it is to be successfully commercialized. The electrode structure plays a significant role in the performance of RFBs. Ideal electrodes should perform efficiently under the severe acidic and oxidizing conditions with satisfactory durability. Taking into account the highly acidic and oxidizing conditions on the cerium half-cell, an electrode employed in that side should maintain outstanding electrochemical behavior toward the Ce(III)/Ce(IV) reaction. Precious metals such as platinum and gold have shown promising performance. However, due to their high cost, the need for cheaper, but effective, electrode materials have become very crucial. Economical carbon-based materials have been shown to provide good kinetic activity for the Ce(III)/Ce(IV) reaction. Particularly, polyacrylonitrile (PAN)-based graphite felt (GF) exhibits excellent chemical and electrochemical catalytic activity due to its excellent stability and conductivity, high specific surface area and enhanced three-dimensional structure. This study concentrated on examining the utilization of modified graphite felts (GFs) as a positive electrode for the Zn-Ce RFB system. Solvothermal method was used to introduce metal oxides electrocatalysts on the GF surface. Tungsten trioxide (WO3) and tin dioxide (SnO2) served as promising metal oxides to enhance hydrophilicity and electrochemical activity of GF. A binary mixture of WO3 and SnO2 was used as a novel candidate to improve the electrochemical activity of pristine GFs for the Ce(III)/Ce(IV) reaction. Half-cell electrochemical characterization was performed using cyclic voltammetry (CV) at room temperature in a 0.05 M Ce(III) MSA + 1.0 M MSA electrolyte. The ratio of the cathodic peak current density to the anodic peak current density (Ipc/Ipa), peak potential separation (ΔEp) and coulombic charge obtained from the CVs were used to assess the activity and reversibility of the Ce(III)/Ce(IV) reaction on the various GF electrode samples. The durability of the modified GF electrodes was evaluated by subjecting them to multiple CV cycles over the voltage range from 0.56 to 1.8 V vs. Ag|AgCl at a scan rate of 10 mV s-1. Modified GFs with the novel binary metal oxide containing both WO3 and SnO2 exhibited superior stability and electrocatalytic performance toward the Ce(III)/Ce(IV) reaction compared to unmodified GF and those modified with the individual oxides alone. Among all GF samples, the binary WO3-SnO2 modified GF showed the highest values of anodic charge (Qa), cathodic charge (Qc) and Qc/Qa. Qc/Qa of as-received GF was found to improve from 17.8% to 50.1% when modified with 0.05M W and 0.05M Sn. The microstructure and composition of the modified GFs were analyzed by scanning electron microscopy (SEM), energy dispersive X-ray spectroscopy (EDX) and X-ray photoelectron spectroscopy (XPS). Overall, findings obtained from these analyses confirmed the successful decoration of W and Sn on the GFs.