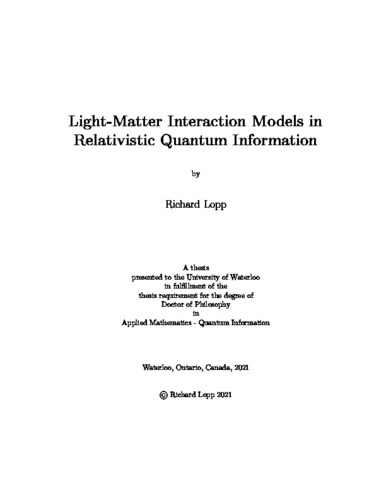 In this thesis, we study the interaction of a first-quantized atomic system with the quantum electromagnetic field within the context of relativistic quantum information (RQI). To that end, we examine common classes of Hamiltonians -- in particular, the dipolar coupling model as well as scalar field analogues (Unruh-DeWitt models) -- for their applicability in RQI setups. Firstly, we investigate how quantum randomness generation based on unbiased measurements on an atom can get compromised by an adversary that has access to the electromagnetic field. We show that preparing the atom in the ground state in the presence of no field excitations is, in general, not the best choice to generate randomness. Secondly, at the study of light-matter interactions inside optical cavities, we show that frequently employed approximations, such as the single-mode approximation and dimensional reduction, fail for relativistic regimes but can be already ill-behaved for non-relativistic scenarios. In particular, we show how approximating a very long and thin cavity by a one-dimensional system can be understood by recasting the D+1 dimensional quantum field inside the cavity as an infinite sum of massive 1+1 dimensional fields. The dimensional reduction approximation can subsequently be identified with ignoring all but one of these subfields or, equivalently, with a change of the atomic localization.     Up to this point, we have treated the atomic center of mass classically -- a feature that is shared by usual Hamiltonians in RQI and quantum optics. We therefore revisit the interaction of atoms and light by considering all atomic degrees of freedom to be quantum. Further, we discuss subtleties with respect to the gauge nature of light and the effect that multipole approximations have. This allows us to connect the multipolar Hamiltonian with the common effective models of quantum optics and relativistic quantum information. In particular, we discuss the influence of atomic center-of-mass delocalization and the presence of the so-called Roentgen term. Significantly, Unruh-DeWitt models fail to account for the entangling interaction between all atomic and field degrees of freedom, and we present then a scalar analogue of the Roentgen term. Finally, we demonstrate how the usual dipole model preserves covariance when considering atoms on relativistic trajectories and how this model can be used as a qualitative means to study RQI scenarios.