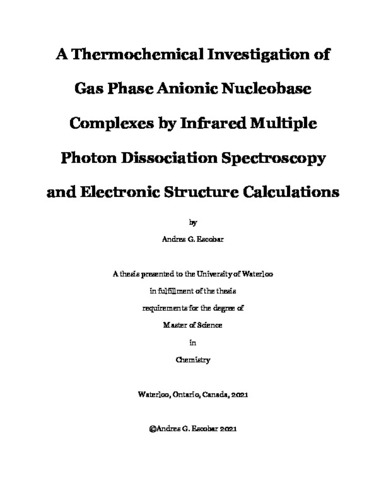 In this thesis, a computational and experimental investigation of gas phase cation-molecule complexes has been undertaken to analyse the gas phase clustering behaviour of biologically relevant cyclic anionic species. Evaluation of computationally determined thermochemical properties to predict the energetic favourability for the formation the cation-molecule clusters as well as the vibrational frequencies unique to each cluster has been carried out. The computational analyses performed in this thesis used the Becke 3-Parameter, Lee, Yang, and Parr (B3LYP) level of theory for geometric optimization and frequency calculations and second order Møller-Plesset perturbation theory (MP2) for single-point energy calculations. In both cases, a split basis set was used to evaluate the non-metallic atoms at 6-311++g(d,p) and the metallic sodium cation at aug-cc-pCVTZ to more accurately evaluate each of the electrons in the system. Complete characterization of each cluster includes comparison to experimentally determined vibrational spectra, which in turn allows for further geometric, electronic, and structural analysis. High-powered lasers, such as a free-electron laser (FEL), produce experimental vibrational spectra through a process known as infrared multiple photon dissociation (IRMPD). IRMPD induces fragmentation of ions produced by electrospray ionization (ESI) through a phenomenon known as internal vibrational redistribution (IVR) where energy absorbed by the analyte ion is redistributed to other vibrational modes. The process of IRMPD can be coupled with electronic structure calculations to gain significant insight into the characterization of ions in the gas phase. The energetic favourability for deprotonating nucleobase monomers is investigated in Chapter 3 to determine the isomer most likely to exist for each nucleobase. Once the most energetically favourable nucleobase isomer was validated experimentally, the clustering behaviour of the monomers with sodium cations was further explored. The clustering of a single deprotonated isomer with one cationic sodium yielded one minimum energy structure for each of the nucleobases, however, as the complexity of the clusters increased the number of possible clustering geometries increased as well. The pyrimidines exhibited unusually favourable complexation of three deprotonated nucleobase monomers in a near C3 symmetry, as well as an extremely favourable linear arrangement. These two favourable geometrical structures were further explored in thymine and uracil complexes as they were the only high-complexity experimental data collected for the nucleobases. Unfortunately, for the purines and cytosine, there was no experimental vibrational spectra to draw conclusions from, however, general trends from computational analysis, as well as similarities between the pyrimidines, were possible to evaluate. This examination found that the clustering behaviour for all the deprotonated nucleobases (at each level of complexity) demonstrated extremely energetically favourable clustering behaviour the gas phase. In addition, the gas phase acidities (GPAs) of each nucleobase were determined to be of comparable strength to other well-documented gas phase acid strengths and found to have acid strengths non-linearly correlated to their respective solution phase pKas. Moreover, novel clustering geometries for multiple deprotonated nucleobase monomers with cationic sodium were revealed. Thus, the importance of evaluating deprotonated nucleobases, in the gas phase, was demonstrated by this study. This investigation revealed strong evidence to support the favourable clustering behaviour of the deprotonated nucleobases with cationic sodium, as well as novel geometries that describe these interesting new complexes in the gas phase. In each case, novel theoretical clustering geometries and thermodynamic properties for each of the biological species evaluated were determined. The hope is to be able to experimentally corroborate these findings in the future.