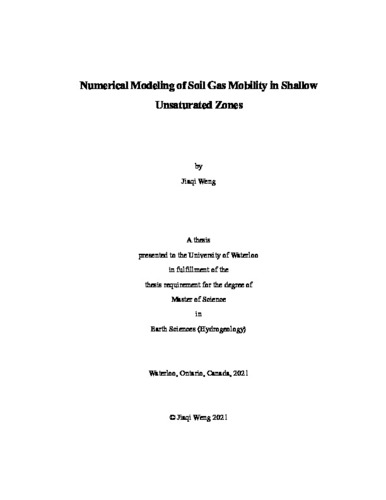 In 2016, greenhouse gases (GHG) released from agricultural soils were estimated to be between 19 and 24 megatonnes of carbon dioxide equivalent with an increasing temporal trend. The processes controlling soil gas mobility in the vadose zone are poorly understood and significantly influence GHG emissions during a seasonal cycle. In this research, conceptual models of the fate of GHG in the vadose zone are presented and investigated through numerical modeling tools. By employing HydroGeoSphere (HGS), the soil gas emissions are estimated by tracking transient variations in soil water storage, assuming that soil pores are occupied either by gas or by water. It is also assumed that the compression, dissolution, and reactions within the water and gas phases are negligible. Therefore, variations in soil water saturation can be converted to variations in soil gas saturation and subsequently, GHG emissions. Field data collected at one of Agriculture Canada’s WEBS research stations near Ottawa, Ontario were used to inform the numerical experiments. One- and three-dimensional simulation domains were used to investigate the influence of soil type, weather, macropore fraction, tile depth and number, ground surface relief, soil heterogeneity, and storm intensity on the mobility and emission behavior of soil GHG. Conceptual storm simulations of 10 days and 21 days and a longer-term climatic simulation utilizing field precipitation and evapotranspiration data were used to investigate the transient nature of soil GHG mobility. The results suggest that permeable soils and soils with low water saturation under dry weather conditions tend to have the highest potential for GHG emission. Macropores may significantly facilitate soil degassing by enhancing the drainage capacity and lowering the initial water saturation of soils. However, the variation of macropore fraction seem to have negligible influence on soil gas emission. Reductions in tile spacing and depth promote soil drainage and consequently act to reduce soil degassing processes. Ground surface topography may promote the soil degassing by generating surface water ponding, which enables soils to absorb more water. Heterogeneously layered soils tend to have less water storage increase and soil gas emission than homogeneous soils during storms, because water may pond on the interface between soil layers with different hydraulic properties resulting in higher overall soil water content. Soil GHG emission tends to increase with increasing storm intensity. In addition, evapotranspiration appears to increase the soil gas emission. However, the strength of these effects is strongly influenced by the drainage capacity and water saturation conditions of soils.