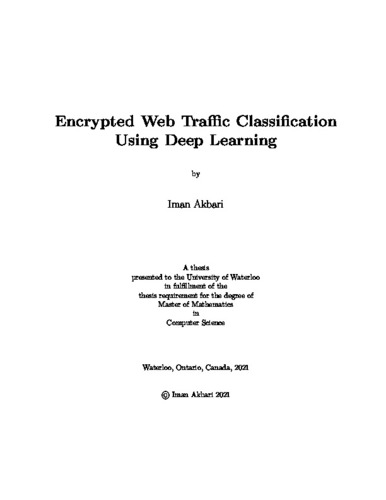 Traffic classification is essential in network management for operations ranging from capacity planning, performance monitoring, volumetry, and resource provisioning, to anomaly detection and security. Recently, it has become increasingly challenging with the widespread adoption of encryption in the Internet, e.g., as a de-facto in HTTP/2 and QUIC protocols. In the current state of encrypted traffic classification using Deep Learning (DL), we identify fundamental issues in the way it is typically approached. For instance, although complex DL models with millions of parameters are being used, these models implement a relatively simple logic based on certain header fields of the TLS handshake, limiting model robustness to future versions of encrypted protocols. Furthermore, encrypted traffic is often treated as any other raw input for DL, while crucial domain-specific considerations exist that are commonly ignored. In this thesis, we design a novel feature engineering approach that generalizes well for encrypted web protocols, and develop a neural network architecture based on Stacked Long Short-Term Memory (LSTM) layers and Convolutional Neural Networks (CNN) that works very well with our feature design. We evaluate our approach on a real-world traffic dataset from a major ISP and Mobile Network Operator. We achieve an accuracy of 95% in service-level classification with less raw traffic and smaller number of parameters, out-performing a state-of-the-art method by nearly 50% fewer false classifications. We show that our DL model generalizes for different classification objectives and encrypted web protocols. We also evaluate our approach on a public QUIC dataset with finer and application-level granularity in labeling, achieving an overall accuracy of 99%.