Comparative risk of cardiac arrhythmias associated with acetylcholinesterase inhibitor use 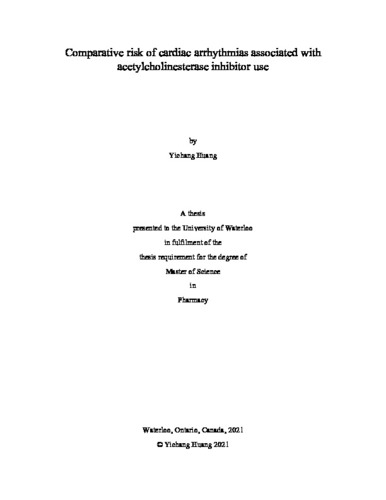 Background: Acquired long-QT syndrome (ALQTS) and its associated condition, torsades de pointes (TdP – a malignant cardiac arrhythmia), are associated with the use of certain medications. Case reports and pharmacodynamic studies suggest donepezil, one of the three acetylcholinesterase inhibitors (AChEIs) used in the treatment of Alzheimer’s Disease (AD) and related dementias, may be associated with a greater risk of ALQTS and malignant arrhythmias. Only a limited number of studies have generated relevant information, and no population-based epidemiologic studies have directly examined comparative risk between AChEIs. Methods: Using Canadian hospitalization and prescription medication administrative databases – the Discharge Abstract Database (DAD) and National Prescription Drug Utilization Information System (NPDUIS) respectively – I included individuals in seven jurisdictions (British Columbia, Alberta, Saskatchewan, Manitoba, Ontario, Prince Edward Island, Newfoundland and Labrador) between April 1st 2011 and January 31st 2019. Included adults were aged 66 and over, and either initiated the use of donepezil, galantamine, oral rivastigmine, or transdermal rivastigmine (defined as no previous dispensation of AChEI recorded in NPDUIS in 365 days prior). The outcome of a hospitalization for malignant arrhythmia was identified by ICD-10-CA codes I47.2 and I49.00. The hospitalization date set as the 15th of the month in primary analysis (with adjustment to first or end of month in sensitivity analyses) and a multivariable Cox regression model was fitted to estimate the hazard of a hospitalization for malignant arrhythmia, dependent upon AChEI use. The primary analysis assessed the time to hospitalization for malignant arrhythmia using the primary DAD diagnostic field and a maximum available follow-up of eight years. In secondary analyses, I included malignant arrhythmia codes from any diagnostic field and limited follow-up to 365 days. Variables adjusted for include demographic covariates and comorbidities identified from previous hospitalizations and prescription medication use. Results: The cohort included 162,527 patients (mean age 82, 40% male; median days follow-up 386). Most subjects (n = 127,038; 78%) were treated with donepezil, while 25,582 (16%) received galantamine and 9,907 (6%) received rivastigmine. During a median follow up of 1.06 years, I identified 90 hospitalizations for a malignant arrhythmia – including 58 in the donepezil group (23 per 100,000 person-years) and 32 for other AChEIs (44 per 100,000 person-years). After adjustment for confounding, initiation of donepezil was associated with a 45% lower hazard of hospitalization (adjusted HR 0.55, 95% CI 0.36 to 0.85) relative to other AChEIs as a group. When assessing for malignant arrhythmias occurring in any diagnosis field, I identified 336 events (258 in the donepezil group and 78 in other AChEIs group); however, donepezil initiation was no longer significantly associated with hospitalizations (adjusted HR 1.01, 95% CI 0.78 to 1.30). My findings were similar in an analysis limited to 365 days of follow-up, and in sensitivity analyses modifying the hospitalization date definition (since only month/year of hospitalization was provided). Conclusion: In this large, population-based cohort study, initiation of donepezil was not associated with an increased risk of hospitalization for malignant arrhythmias in comparison to other AChEIs. This was not consistent with case reports and pharmacodynamic studies. Given that adjustment for confounders moved the HR towards the null, residual confounding, caused by uncaptured comorbidities may have caused the lower risk in the donepezil group (e.g., since donepezil is a first line AChEI for treatment of Alzheimer’s). Further research is warranted.