Energy Saving Behaviours of Occupants in a Multi-Tenant Zero-Carbon Office Building: The Integration of Social Influence Theory and the Energy Cultures Framework 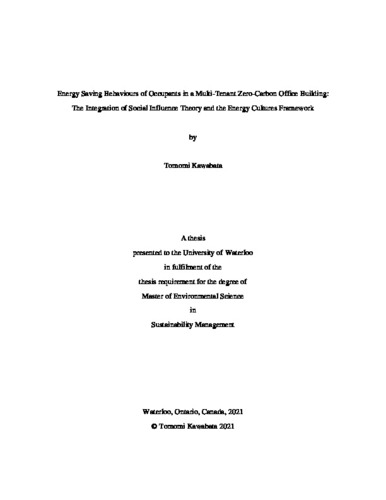 Energy sustainability in the building industry has received increased attention as building technologies become more energy efficient and the building codes become more stringent. However, the role of occupants in energy conservation of commercial buildings has not been studied as often. This study documents changes and the impact of occupant behaviour on energy usage in a net-positive, zero-carbon office building in Ontario, Canada. The integration of social influence theory and the energy cultures framework sheds light on the interactions between human and physical factors which influence the energy sustainability of buildings. This study examined stairs usage, as well as electricity usage for lighting and plug loads in order to document and gain insights into occupant behaviour. The effects of multiple interventions, such as structural interventions, information provision, and the COVID-19 pandemic, were investigated to see changes in occupant behaviour and its impact on electricity usage in the building. This study also explored how social influence related to occupant energy saving behaviour in the zero-carbon building, which would reveal the influence of socio-psychological factors on occupant behaviour. The results of this study demonstrate the importance of occupant behaviour for energy sustainability of buildings, and illustrates that the role of occupants in energy saving becomes more important when building technologies become more energy efficient. From the perspective of the energy cultures framework, material culture, such as the building design, the presence of a central staircase, devices, and appliances, was found to have a strong impact on both stairs usage and electricity usage of occupants in the building. However, the results also indicate that material culture alone may not promote energy saving behaviour among occupants over the long run, and further stimulation on cognitive norms and energy practices is necessary to maintain energy saving behaviour by occupants. Furthermore, the predicted impact of social influence was not observed on energy saving behaviour of occupants in the building. Nevertheless, the results also implied that electricity usage for plug loads may be more subject to social influence since individual occupants had more control over plug loads than lighting. Hence, this study contributes to the understanding of the relationships between human and physical factors, as well as the role of occupants in the zero-carbon building by developing a holistic approach to energy sustainability.