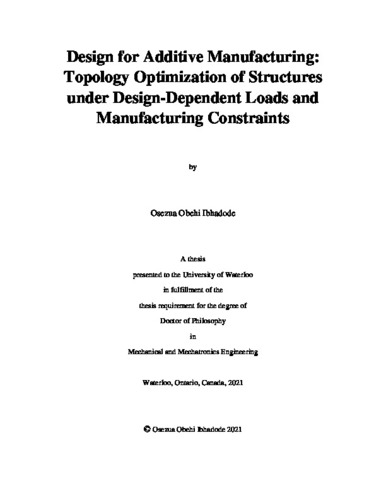 The advances in additive manufacturing (AM) have opened new possibilities in design and manufacturing that were not previously attainable. AM has found application in several industries such as aerospace, medical, automotive, power, and a host of others. Of its many unique selling points, one of the most appealing is the design freedom it offers due to its capability to produce structurally complex parts. In design for additive manufacturing (DfAM), one of the most common structural design tools is topology optimization. Topology optimization is a mathematical tool that obtains the optimal structural layout of a design for an objective, and together with additive manufacturing, optimal structural designs are possible with almost no manufacturability concern so long certain constraints are adhered to. Many efforts have gone into topology optimization for design-independent loads such as point forces, restricted or design-independent pressure loads, torques, etc., including the considerations for additive manufacturing. However, fewer works exist for design-dependent loads, especially when multiple load cases are concerned. Furthermore, even fewer works have attempted to develop topology optimization models for design-dependent loads while considering manufacturability. In this research, frameworks have been proposed to handle topology optimization of structures under design-dependent loads (thermal stress load – TSL, centrifugal loads, and design-dependent pressure loads) and AM constraints (overhang and feature size control). The first framework for design-dependent loads is achieved by introducing the Boundary Identification and Load Evolution (BILE) model, load thresholding, and sensitivity scaling in a weighted multiobjective topology optimization process. The BILE model, specifically for pressure loads, resulted in optimal designs under 80 seconds and 100 iterations for 5,000 to 13,000 design elements using a regular desktop computing power. Load thresholding applied to thermal stress loads for a threshold η=0.8, resulted in a reasonably stable optimization process. Also, sensitivity scales were applied to sensitivity contributions from TSLs and centrifugal loads. This ensured that optimal solutions were obtained with fewer numerical instabilities while using simple optimizers at low optimization iterations. The second framework developed is a post-topology optimization process for overhang feature elimination. Aside from the fact that volume correction is possible in this framework, boundary identification and overhang elimination, being key stages in the model, consumed only 8% of the combined process of topology optimization and overhang feature control. Two design case studies were printed using Laser Powder Bed Fusion (LPBF) and Material Extrusion, known as Fused Deposition Modeling (FDM), for manufacturability validation. Additional performance validation studies to investigate the relationship between manufacturing constraints, residual surface stresses, and structural performance were carried out on the optimized LPBF parts. No meaningful effect of overhang and feature size control was discovered on the residual stresses formed for Hastelloy X parts. However, bending test results revealed a 30% decrease in the maximum load (and a 40% increase in compliance) when a 65° overhang angle constraint was placed on a Hastelloy X optimized part. Fortunately, the performances improve when smaller angles (45° or 50°) and feature size (5a) constraints are imposed. Finally, an image-based initialization and post-processing code for topology optimization is provided to aid research and teaching.