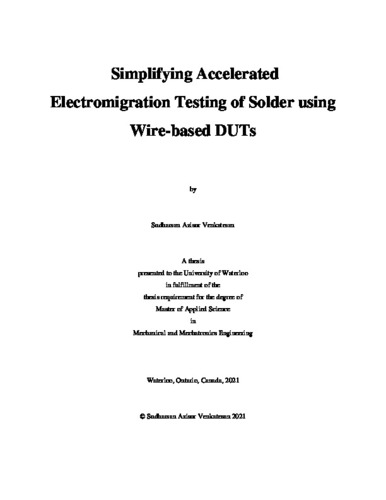 A novel and accelerated method for the characterization of Electromigration (EM) in a solder material typically used in electronics packaging is proposed in this report. The method includes a novel approach to prepare EM specimens from solder wire by manufacturing a constriction, which added typically a few milliohms to the resistance. The method further includes a fusion-current based procedure to select the stressing current level, as a defined percentage of fusion current (FCP) of each specific specimen. The method is validated using EM experiments of constricted wire specimens made from Sn-0.7Cu solder. The experiments were organized in a 2x2 DOE (Design of Experiments) with FCP and specimen temperature TS as the factors. The value of TS was adjusted using the ambient temperature TA with a process based on measured values for thermal resistance between specimen and ambient (Rth = 280 K/W) and for the temperature coefficient of resistance (TCR = 0.004183 1/K at 25 ºC) of the specimen. The DOE levels for TS were 181.25 ºC and 165.95 ºC and for FCP were 75 % and 80 % of the fusion current. MTTF (Mean Time to Failure) is calculated using a conventional Weibull, Lognormal and a Censored Lognormal distribution for all four DOE legs and the effects are reported. Censored Lognormal analysis is found to be the best fit for data collected using this method. A 3% change in Fusion Temperature Percentage (FTP) is found to have an effect 2.22 time greater than a 5% change in FCP. The proposed method is also tested on SAC305 solder and the comparative results are reported. Future steps to study the combined effects of EM and TM are proposed.